As I pen this vignette in January of 2004, I have flown around the world four times and plan my fifth trip for 2005. My first trip is memorialized in the book " A World Flight Over Russia" by Brad Butler. My co-pilot on that trip, Dennis Stewart, in his book entitled "Bonanza Around The World", chronicles my second flight. Horst Ellenberger covers most of my third trip in his short article that is posted in this section of the Earthrounders web site. My fourth flight is the subject of ongoing articles published in the World Beechcraft Magazine where I am the contributing editor for the column entitled "Long Ranger". I have been contributing articles on the subject of long distance flying to the WBS magazine since 1992. Lastly, I have made over 100 presentations to numerous aviation and non-aviation groups on the flights I have undertaken. Bob and Dennis 1992, Santa Monica, ready to depart for
an Around the World flight through Russia.

The airplane I have used for these endeavors has been a 1989 model Beech A-36 that was fitted with the Allison B-17 C 420 hp Prop-Jet engine when it was new. I chose this airplane/engine combination for comfort, speed, reliability and the availability and cost of the fuel; Jet-A.

From my perspective, circumnavigating the globe in a small airplane is the ultimate flying adventure. The planning and engineering required for the airplane is challenging and interesting. Exploring the weather systems to be encountered enroute exposes one to a large educational opportunity. Dealing with worldwide bureaucracies and regulations is quite daunting and yet another learning opportunity. If one is an avid reader and historian the journey could be quite meaningful and fulfilling. And one could go on and on describing the multi-dimensional aspects of this type of undertaking. No other single aviation event is this rich in content and equally multi-faceted.

My first flight, in the summer of 1992, the trip through Russia, was organized as an Air Rally by Marcel Large of France. We had 12 airplanes participate. My co-pilot was Dennis Stewart of San Diego. He and I had been aviation friends for a number of years and therefore knew that we could share the cockpit without difficulty. Dennis was a former US Air Force pilot on the C 124 and had significant experience plying the Pacific at 12,000 Feet. His navigational skills and weather interpretation skills were better than perfect. One's first circumnavigation of the globe always stands apart from subsequent flights because the aura of the unknown was present. On my second flight in 1994, I once again enjoyed the company of Dennis and the circumstance of the flight was another organized event with multiple airplanes. This time it was an air race organized by Bernard Lamy and his staff at Arc En Ciel. Like the first trip it is a French operation.

My third trip, in 1999, paired me with a group of German enthusiasts; Horst Ellenberger, Peter Woefel and his two sons, Juergen Timm and Gunther Kuhlmann. I was solo in my airplane and without accompanying aircraft for part of the trip (San Diego to Nurnberg), Solo in a flight of two (Nurnberg to Luxor) and solo but in a flight of three( Luxor to San Diego). The other two airplanes had changing co-pilots throughout until Peter finally went solo, then solo and unaccompanied.

On my fourth flight in 2003, I took a neophyte under wing. We met in our respective airplanes in Bangor Maine and were a flight of two until the Maldives then I went unaccompanied to Cocos-Keeling and Port Headland while he went two legs in the company of an Austrian airplane then unaccompanied to join me in Port Headland.

On all these flights it has become clear that the distilled essence of such flight is: do not get lost, do not run out of fuel, do not get sick, do not run afoul of the bureaucrats and finally, do not try to make your own weather or winds aloft. I did turn back once on a flight from San Diego to Hilo Hawaii. After 6 hrs it became apparent that my fuel was inadequate to continue. The most spectacular natural wonder encountered was Greenland. As an American and student of history, the most interesting city visited was Istanbul. The two worst places visited were Calcutta and Tarawa-it is difficult to view the poverty. The most spectacular sunrise-sunset flights occurred while flying the wide expanses of the Pacific Ocean. The longest leg was Hilo Hawaii to San Diego at 2200NM and 12.5 and 13.5 hrs. In my first ATW flight I employed a 90 gallon cabin tank and 20 gallon tip tanks. In my second trip I employed a 90 gallon cabin tank and 100 gallon tip tanks affectionately referred to as Dolly Partons. On my third and fourth flights in order to make the 2200NM leg from Hilo to San Diego, I employed a 140 gallon cabin tank and the 100 gallon tip tanks. The rule I have adopted for all my legs is to have a three hour reserve of fuel. I learned this from Louise Sacchi, a ferry pilot with extensive trans Atlantic and trans Pacific experience in Bonanzas. She authored the book "Ocean Flying" which is the absolute bible on this subject. While no longer in print one can, on occasion, find a copy on the used book web sites. Another valuable resource is AC-U-KWIK, a publication sold through FBOs worldwide. This book lists detailed airport information, entry requirements and telephone and fax numbers for the airport authority, fuelers and local hotels. Another rule I have adopted is to call ahead to make sure fuel is available. My now standard route to cross the Atlantic is St Johns Newfoundland to Santa Maria in the Azores then on to Lisbon Portugal, or Santiago or Malaga Spain. While one should at least once experience Greenland and Iceland, the weather through the Azores is better and more predictable. I use this route for ATW flights and jaunts to Europe. Be advised that HF radio is mandatory and absolutely required on this route as it is from Hawaii to the US mainland. The route that avoids the Middle East, the Gulf States, Pakistan and India is across the Indian Ocean. On the 2003 trip I chose to proceed from Nairobi to the Seychelles then to the Maldives then Cocos-Keeling then Port Headland Australia. In the category of white-knuckle landings I have had two. Landing on Cocos on a pitch-black night with a 20kt crosswind was stressful, as I had to combat vertigo. There were no lights save for the runway lights and as I banked the airplane to stay on the approach centerline I had the visual sensation of the runway tilting left then right. My other experience in landing in non-ideal conditions was a precision radar approach to Goosebay. I had a fantastic controller who kept me on center line and on glide slope and when he said, "begin flare" I broke out at some 50ft above the runway for a perfect landing. It was bitter cold as I exited the airplane and I was soak and wet.

From an instructional point of view ATW flying will require currency in IFR operations as many of the destinations will not have accurate weather forecasts and/or the legs are so long that the weather can change quite dramatically while you are enroute. Arriving at destination with minimum fuel reserves and no alternates within range will require a landing. 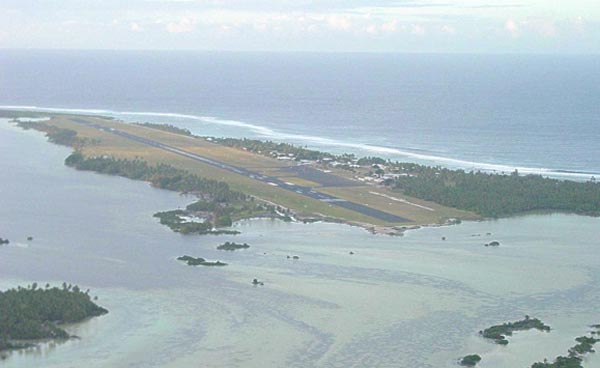 This is an artist rendering of my Around-The-World Bonanza. I have included here the link to artist Adrian Starling of the UK who did this piece. He charges $375 US. Many of our Earthrounders might wish to have one of these for there birds.I had Adrian do my Cessna 195 and he is in the process of doing my Stearman, Wildcat VI and Polikarpov I-16.
Here is the artist address:
http://www.aero-art.net.


I plan a fifth flight on a route that I have not done before and that is the South Atlantic. You may contact me at bobreiss@lajollafarms.com


Unfortunately, Bob Reiss never flew that fifth flight around the World. He passed away on April 17, 2005.