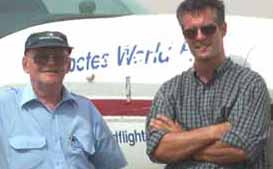 December 21, 2002: Doug Cairns of the Diabetes World Flight arrives in Perth (Western Australia) in his Baron. He was met by Claude Meunier at Jandakot Airport.
Click on photo to enlarge


December 15, 2002: Earthrounders.com wishes a happy Christmas to all Earthrounders and their families. We hope you are putting Perth on the agenda for August 2003. See you there!

November 24, 2002: Frenchman Henri Chorosz attempting a RTW flight over the poles crash-landed on tiny Marion Island when running too low on fuel to make it to Antartica. http://www.capetimes.co.za/index.php?fArticleId=20896
November 15, 2002: Earthrounder Quentin Smith with UK pilot Steve Brooks flew to the North Pole in June 2002 in Brooks' Robinson 44 helicopter, G-NUDE, being the first piston helicopter to reach the North Pole. (From the magazine Heli-Ops International : http://www.oceania-group.com)
October 4, 2002: Diabetes World Flight reached Scotland on 7th October after a memorable North Atlantic crossing. See : http://www.diabetesworldflight.com
October 4, 2002: Australian pilot Dick Smith has just completed his 5th flight around the world – and this time he claims it is his last. Click here for details
September 24, 2002: Briton Douglas Cairns left Omaha, Neb. eastbound on 24th Sep flying a Beech Baron 58. Due to restrictions on pilots with Type I diabetes imposed by certain countries, on those legs he must carry a co-pilot.
September 16, 2002: Rode Rodewald, the first wheelchair aviator to fly solo around the world (1984), sadly passed away from complications from diabetes. He was an excellent and gutsy pilot and left us at the grand old age of 85 in Oakland, Ca.
September 10, 2002: Jason Bahnsen, with co-pilots Brett Tait (Australia to Thailand) and Mark Willets (Thailand to Canada) is in Canada and plans to continue solo around the World. http://www.geocities.com/julietdeltayankee
August 31, 2002: Slovenian Matevz Lenarcic has had to abandon his RTW flight in Canada as the Canadian CAA does not allow him to fly on across the North Atlantic. What a pity, after all his efforts through the Russian bureaucracy and the flying difficulties. Congratulations to Matevz on an epic flight thus far.
http://www.worldtranssiberia.com/

July 21, 2002: Peter Woelfel organised a hangar barbeque-cum-bierfest as a mini Earthrounders gathering in Würzburg, Germany to welcome Bob Reiss and Willie Tashima flying in from San Diego. ( Click on photo to enlarge)
July 20, 2002: Slovenian Matevz Lenarcic is currently 6 weeks into a circumnavigation route that he hoped would take him solo across Russia in his Zenith CH-701 Ultralight. After considerable delays with flight permissions he is now on his way accompanied by a Russian navigator.

July 13, 2002: Earthrounders Bob Reiss & Willy Tashima (Turbine Bonanza) met Dick Smith & Gerard Moss (Cessna Caravan) unexpectedly in St Johns as each prepared to cross the Atlantic to the Azores. Between them, they have clocked up 11 RTW flights! Dick 4, Bob 3, Gerard 2 & Willy 2. They flew almost together to Santa Maria where they were met by Kofi Annan! (Click on photo to enlarge)
July 10, 2002: For making their stunning first ever flight around the world by balloon (1999), Bertrand Piccard and Brian Jones were selected as Number One of the Top Ten most amazing records in the Guinness Book, in a program shown on the People & Arts Channel.

July 4, 2002: Steve Fossett lands sucessfuly in S-W Queensland, ending his 6th attempt to fly solo around the World in a balloon. Congratulations Steve!!!
http://www.spiritoffreedom.com/
July 2, 2002: Steve Fossett crosses the meridien of Northam (Western Australia), completing the first solo RTW flight in a balloon in 14 days (faster than some powered flights!!). He is continuing toward a landing in South Australia.
June 19, 2002: Steve Fossett launches successfuly on his 6th solo attempt around the World from Northam (Western Australia) at 01:37 UTC. Earthrounders Dick Smith and Claude Meunier were there to wish him fair winds. Good luck Steve. Click on photo to enlarge.
June 12, 2002: Steve Fossett is about to start from Northam (Western Australia) on his 6th attempt to fly around the World in a hot air balloon.
June 7, 2002: Jason Bahsen & Brett Tait departed Melbourne by Mooney on the first stage of a RTW flight that will break off in Canada. http://www.geocities/julietdeltayankee
June 1, 2002: Angela and Flemming Pedersen complete their very succesful RTW. Congratulations!!! http://honeymooney.com/
May 25, 2002: Bill Finlen lands in Brisbane after a very successful RTW flight in his Bonanza VH-TYE. Congtatulations and welcome home Bill !!! http://www.airsafaris.com.au/
In the meantime, Angela and Flemming are crossing the Atlantic.
May 16, 2002: Bill Finlen has landed in Hilo (Hawaii) after a flight of 14 hours 40 minutes.
May 11, 2002: Cobwebs are flying off the aircraft as a battery of pilots prepare for RTW flights in very different aircraft. June departures are Ajab Khan and copilot Zakaullah Bhangoo in a little microlight from Pakistan http://geocities.com/spiritofpakistan> and Jason Banhsen in a Mooney from Australia, stopping off for a while in Canada and returning the long way round. In August we have Carsten Sundin in his second attempt in a Lancair from Redmont, Oregon and Mickey Russell and crew by twin-engine Piper Geronimo from New York in August. ( http://www.911worldflight.org/)
May 10, 2002: Bill Finlen is in the USA and enjoying it.
May 8, 2002: Flemming and Angela still in the Caribbean.
April 26, 2002: Bil Finlen landed safely (but tired) after his unusual crossing of the South Atlantic yesterday between Abidjan (Ivory Coast) and Recife (Brasil). 15 hours with tail winds.
April 22, 2002: Douglas Cairns, a former RAF pilot currently living in Thailand, will be setting off RTW in a B55 later this year to prove that being a pilot and having diabetes can go hand in hand. Only the USA, Canada and Australia currently authorize such licences. http://www.diabetesworldflight.com
April 15, 2002: Flemming and Angela head today for Cuba, where they expect to be incomunicado for a week. http://homepage.swissonline.ch/pedersen/honey_mooney/
April 14, 2002: Earthrounder Jorge Cornish reports that flying into the US is "almost" back to being easy, for Mexican and Canadian registered aircraft, anyway. For the rest of us, there's a bit more bureaucracy still.
April 12, 2002: António Faria e Melo, the Portuguese wheelchair aviator who has already flown solo RTW, is planning another trip later this year, westbound, along with another Bonanza piloted by Delfim Costa.
April9, 2002: Colin and Nadine Hales left UK in Oct 2001 on a slow flight to Australia in their homebuilt KR2. From there, they intend to ship the plane to the US. They are currently headed for Burma. http://fly.to/worldtour

April 14, 2002: Bill Finlen is enjoying the sun in the Seychelles.
April 1, 2002: Bill Finlen of Brisbane (Queensland) departs in his Bonanza VH-TYE for his westbound flight around the world. Bill Finlen & Claude Meunier, Brisbane 28/03/2002 Click on photo to enlarge
March 23, 2002: Fleming crosses the Pacific between Hilo and California after 14 hours and 9 minutes in the air. Angela and the copilot seat are arriving tonight by airline...
Febrary 10, 2002: Bill Finlen of Queensland (Australia) is soon to start his flight around the World with a departure date set on April 1. Good luck.
January 27, 2002: Major Jugbhery of Bangladesh is soon to start a circumnavigation in a Velocity. We wish him fair winds all the way. If all goes well, he will be the first pilot from the Sub-Continent to complete the circle. http://www.aimvml-bd.com
January 26, 2002: Planning or dreaming of passing through Japan but afraid of extortionate landing fees? Check out this report-explanation on AOPA-Japan's site describing Gerard Moss' 5-stop visit.
http://www.aopa.jp/english/freport/moss/moss.htm