December 28, 2012: Henning Huffer announces that both a trailer and a full DVD on his "The Bounty Saga" are now available from Amazon.
Full details

November 15, 2012:
Sad news received from Mike McDonald:
"I wanted to let the group know that Dr. Dale passed away on October 23rd here in Afton, Wyoming. Dr. Dale was 87. He became an Earthrounder in 1982 when he flew around the World (West to East) in his C-310. I loved Wyn like a father, he will be missed. Wyn had no offspring, just me, his sergeant son. "
Our sincere condolances.
Mike intends to fly around the World in the new Flight Design C4 as soon as it is fully certified. 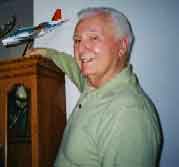 October 21, 2012:
Sincere congratulations to Earthrounder Elgen Long, who has been inducted in the Oregon Aviation Hall of Fame. (RTW in 1971 via the 4 Poles, First RTW to overfly both Poles in a Piper Navajo, N9097Y, Crossroads Endeavour).
The Evergreen Aviation and Space Museum is the home of the Oregon Aviation Hall of Fame and also of the "Spruce Goose":
http://www.evergreenmuseum.org/upcoming-events/.

September 29, 2012:
At 22, a joyful Carlo Schmid, has just become the youngest pilot to fly around the world solo. With the campaign "RTW 2012 - round the world for children" this young Swiss pilot flew to 21 countries and raised CHF 50,000 for UNICEF, destined for a girls' education project in India. Our congratulations and admiration for his inspiring accomplishment.
At 22 years of age, Carlo broke the record of youngest solo RTW flight, replacing Barrington Irving . 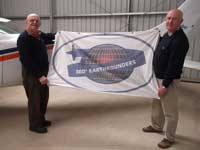 
August 26, 2012:
Brazilians Walter Toledo and Eduardo Fleury have just closed the circle in Miami, becoming the youngest crew to complete a RTW, accomplished at 20 years of age. Our congratulations!
http://www.facebook.com/BrasilVoandoAlto

August 22, 2012:
Helmuth Lehner has arrived back in Austria on the final leg of his long journey around the world, which can produce unexpected obstacles. We congratulate him on his attempt, but circumstances led him to ship his aircraft between Hawaii and continental USA

August 20, 2012:
Carlo Schmid departed Dübendorf (Switzerland) on July 11 for a RTW helping UNICEF in a Cessna 210, HB-RTW
He is trying to become "the youngest pilot ever arrempting to fly solo around the World", breaking Barrington Irving record of 2006.
http://www.rtw2012.com/

August 17, 2012:
From Theodore Robert Wright: "I will be flying my Baron around the world, starting from OshKosh in 2013. We are raising money for children with cancer and to spread awareness of General Aviation. Please take a look at our website for further information."
http://www.aroundtheworldforlife.org/

August 17, 2012:
From Jack Wiegand:" Looking for a plane to lease to fly around the world next summer. Preferably something that can go faster then 200kts. I have around 420 hours in airplanes and have an instrument rating. I would be looking to lease for 6 months. Please contact if you are interested."
E mail: jack.wiegand8@gmail.com
Phone: (559) 974-0082

August 2, 2012:
From David Bowie:"Please find a "link" below for details of my 2012 RWT attempt. My aircraft is a Cirrus SR22 ( N56AH). I shall be travelling west bound and will have ferry tanks fitted in the USA. Then cross the Pacific to Australia and then back to England. My base is Sleap airfield (EGCV) in Shropshire. My expected depature date is 1st September 2012."
http://blog.travelpod.com/travel-blog/davidbowie/1/tpod.html

July 30, 2012:
Announcing CarolAnn Garratt's book, on her third RTW.
Details and review
Can be ordered through www.alsworldflight.com.
All proceeds from the book go to aid research into motor neurone disease. 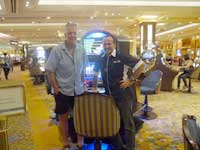 July 11, 2012:
From Marc Cervantes: "Two young pilots are looking to fly around the world in a light twin (possibly a Diamond DA-42 diesel). We have questions in many areas concerning the trip, especially since we do not own a plane to complete this mission. Seeking advice from experienced pilots who either have flown around the world or are knowledgeable in such area.
Please contact us at: marc.cervantes718@gmail.com"

July 3, 2012:
From Earthrounder Douglas Cairns: "Last week we used my Diabetes World Flight Baron B58 and a Cessna 310, both flown by pilots with type 1 diabetes, to set a simultaneous transcontinental world speed record from Florida to California, in formation together. We took 12 hours and 37 minutes to set the new record (subject to ratification) and were delighted to be interviewed by CBS and Fox News on arrival at Gillespie Airfield, San Diego. "
A one-minute video taster can be seen here: http://www.youtube.com/watch?v=jHwossaDKYg&feature=youtu.be
http://www.flyingwithdiabetes.com


June 25, 2012:
Walter Toledo and Eduardo Fleury will depart Goiânia, Brazil for an east-bound RTW on 8th July in a PA-46 Malibu Matrix. Walter Toledo, 20, aims to set a record as the youngest PIC to fly around the world.
Their flight can be followed on: http://www.facebook.com/BrasilVoandoAlto

May 27 2012:
Congratulations to Captain Ignas Krivickas and Copilot Jonas Juknius from Lithuania, for the completion of their RTW in Mooney N 1012P. The flight started on April 5 from Straubing, EDMS and finished on May 17, 2012.

May 23 2012:
Bruce and Liz Jones of Triton Submarines LLC will be flying around the World in a RV10 fitted with DeltaHawk diesel engine.
http://rtw-adventure.com 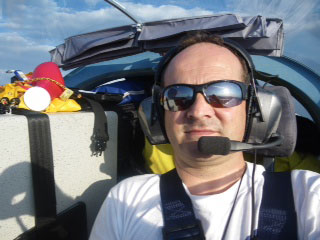 May 13 2012:
Helmuth Lehner started his RTW from Austria. He is now in Sitia and expects to be in Luxor today.
"I started with nearly no money in the pocket so I am still depending on donations,otherwise I will be grounded at least in Thailand.
Donations would be welcome!! Thank you."
www.weltumrunder.at

May 2, 2012:
Thank you to Jim Nisbet for bringing news of how the new Italian "luxury tax" on visiting foreign aircrafts has been "modified" by the Italian Parlement.
Full story from the AOPA Europe Enews

April 20, 2012:
Congratulations to Matevž Lenarčič for the successful completion of his RTW in a Pipistrel. He landed yesterday April 19, 2012 at Ljubljana Airport after an epic flight around the World.
http://www.worldgreenflight.com/

April 16, 2012:
Enterprising Swiss cyclist-pilot Heinz Peier arrived in Brasília for a few days. He travels in his speedy red SX300, with the tiniest rucksack you have ever seen, so that there is more room for his bike once dismantled. Here he is seen putting it back together again, ready to "hit the town"!
Larger picture
His travel Pod

April 18, 2012:
Thank you to Jim Nisbet for pointing out the new Italian "luxury tax" on visiting foreign aircraft spending more than 48 hours in Italy.
Read the full story

April 12, 2012:
Helmuth Lehner announces his departure on May 11, 2012.
He is still depending on sponsorship and donations for flying for children in need.
www.weltumrunder.at April 1, 2012:
The Florida seventh Earthrounders Meeting was an astounding success. We are all very gratefull to Chairman Bob Gannon and to 'bro' Dan. The venue at Chalet Suzanne was very pleasant. We had the opportunity to visit Fantasy of Flight and Sun-n-Fun.
Thank you Bob.


March 20, 2012:
STOP PRESS! From the Florida Meeting Chairman:
I have received several requests for folks who want to drop into Chalet Suzanne for the BBQ or a discussion group or whatever but never registered. The venues and numbers have already been committed and we don't have room for any more airplanes or people other than those who have already registered for the event. Attendees are requested not to invite any friends to Chalet Suzanne during our event. Chalet Suzanne is full.
Please direct them to meet up with their friends at Sun n Fun on Tuesday or Wednesday.
Thank you.
BG

March 5, 2012: Michel Laplace-Toulouse of African Latitude is looking for information on crossing the North Atlantic in a VFR Spercub.
Full details

January 1, 2012: "In the early days of 2012, Matevž Lenarčič, a biologist, environmentalist and photographer-pilot will again set course in his small aircraft for a lonely flight around the world, this time in a westerly direction."
www.worldgreenflight.com

February 10, 2012: Sergey Terekhin with Gerard Moss when passing through Brasilia last week, on a tour of South America with Bob Bates. They are eventually heading up to join the Earthrounders meeting in Florida in due course.
You can follow their journey on www.pngtours.com/tours/southamerica.htm

January 31, 2012: Two motor-glider Earthrounders reunite. Slovenian Matevz Lenarcic arrived in Rio de Janeiro for a one-night stopover on his current circumnavigation (his second) and Gérard Moss (2 RTWs under his belt) went there to meet him. Needless to say, they had a lot to talk about, both being concerned about environmental issues with a focus on fresh water.
Larger picture
www.worldgreenflight.com

January 23, 2012:
Happy New Year of the Dragon: 新年快乐
May you have a prosperous New Year 恭喜发财


January 10, 2012: Matevž Lenarčič is now well on his way around the World, having already reached Dakar.
www.worldgreenflight.com