December 29 , 2014: Bill Harrelson has started his World Record Attempt to fly around the world by the poles in a Lancair IV.
He can be followed on Spidertracks at: https://go.spidertracks.com/fleetpro/public/zqpilot/tracks
His Facebook page is: ZQ Pilot
Thank you to CA Garratt for passing the information.

December 27 , 2014: Mr. António Veladas did announce a double RTW from both Timor and from Portugal to mark the 500th year since the arrival of the Portuguese in Timor Leste.
He plans to depart for the first of these 2 records breaking RTWs from Portugal on May 5th.
http://2015timorportugal500anos.wordpress.com/

Happy landings, blue skies, tail winds and all this kind of things....

Hope we can all meet again, this time in Thailand....

October 13, 2014
From Matevz Lenarcic: I would just like to inform that a book about my 2012/13 RTW and North Pole “Over the Blue Planet" in Pipistrel Virus ultralight is in the bookstores in Slovene, English and German version..
Full details on the Books Page 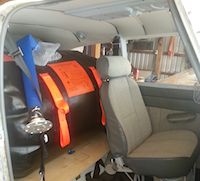 October 3, 2014
Sincere congratulations to Trevor Laundy for the successful completion of the part 2 of his RTW. He landed at Peterborough UK (EGSF) coming from Santa Maria, Azores (LPAZ).

October 2, 2014
Geraldine “Jerrie” Mock, the first woman to fly solo around the globe, has died in her sleep at her home in Quincy in northern Florida.
Read "The Colombus Disparch's" .obituary
Our most sincere condolences to her family and thanks to Thom Kane for giving us the sad news.

September 16, 2014
After several months of consultation and several hundred emails exchanged across the vast world, it was decided to hold the next Earthrounders Meeting in Thailand at the gracious invitation of Norm, Lec and young Isaiah Livingstone.
Details of the time and of the venue for the meeting are still to be worked out. We shall publish them as soon as they are available.
The entire Earthrounders community would like to thank the Livingstone family for their invitation and we all look forward at our first Meeting in Asia.

September 9, 2014
From Mike Condon in New Zealand:
"Robinson R66's RA-06345 and RA-06360 are set to leave Russia later this month on a mammoth trip which is to include Australia and New Zealand. "
Thank you Mike.
The pilots are: Evgeny Kabanov, Igor Rudoy, Alexander Kurylev and Alexey Murashov

August 25, 2014
Richard Cook is selling Frank Haile's last set of 100 gal tip tanks, email Richard for information and pricing.
NOTE: Only the tip tanks are for sale!! The aircraft has already been sold!!
RichardKCook@me.com
Larger picture

August 17, 2014
Heinz Peier sends this photo of his SX 500 at Lord Howe Island. He is now in New Zealand continuing his RTW.
Larger photo

August 15, 2014
Earthrounders photos at the Oshkosh AirVenture are finally trickeling in... Thank you to Doug Jefferey for this one. Please keep sending'm...
Larger photo 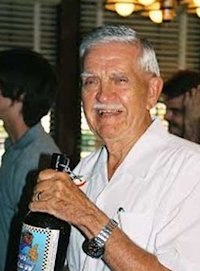 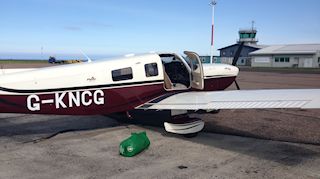 July 29, 2014
We are happy to announce that Paul Moyle, who had an unfortunate mishap in Nuuk (Greenland) shortly before completing a RTW flight on 2008, has returned to Nuuk and subsequently completed the circuit. He has sent us this touching message: "My round the world challenge was completed yesterday in Bristol at 1230, I must say it is probably the most satisfying day in my life. To have completed this challenge has had me pulling my hair out (not that I have much left) at times but the sense of relief of having become an Earthrounder is palpable!!"
Well done, Paul, for never giving up!
Larger picture

July 14, 2014
Congratulations to Matt Guthmiller for the successful completion of his RTW. He had left El Cajon CA on May 31, 2014 and subject to confirmation, he is the youngest solo pilot around the World being 19 years, 7 months and 15 days. Previous youngest solo pilot was Ryan Campbell at 19 years, 7 months and 25 days of age.
Limitless-Horizons.org

July 7, 2014
Heinz Peier at the start of his Australian Odyssey has visited Earthrounder Claude Meunier in Northam (YNTM) in Western Australia with his beautiful SX-300.
More pictures

June 25, 2014
Mini Earthrounders meeting at "HB" where Angela and Flemming and "HoneyMooney" live.
Rodney Blois (UK) came to visit the Pedersens in his C172 in between the Guernsey Rally (where he won first prize) and the Cognac Rally (where he won 2nd prize). First prize is the participant's weight in Cognac!.
They discussed options for the next Earthrounders meeting in 2016.
More pictures

June 20, 2014
FUEL AT ADAK
From Wolf Shroen: We still have 5 x 55-gal drums of Avgas for sale in Adak. Any interested parties can email me at "wolf_schroen(at)hotmail.com".

June 16, 2014
Matt Guthmillern in his quest to be the youngest solo pilot around the World has left El Cajon CA on May 31, 2014. He is flying a 1981 A36 Bonanza N367HP and raising money for Code.org (a nonprofit organisation working to put computer science education programs in K-12 schools).
He arrived today in Athens, Greece.
Limitless-Horizons.org

June 14, 2014
Debasish Banerjee is announcing his RTW in a Cessna 182. Both him and his crew are diabetic and he plans to make the flight a tool to raise awareness of Diabetes. He plans to fly in the Summer of 2015 eastward from 1A5 Macon County Airport.

June 13, 2014
MINI EARTHROUNDERS MEETING IN BRISBANE
From Dave McElroy: "James Tan, Ryan Campbell and I will get together for dinner in the Brisbane area on June 29th. Please spread the word in case other Earthrounders/friends might be in a position to join?
Should be fun. James and I will launch the next morning on a Pacific crossing as FlyRTW80 continutes its eastward RTW. " .
Anyone interrested should contact Dave: dave@flyrtw80.com
www.FlyRTW80.com

June 10, 2014
Dave McElroy and Chris Elgar have left Toronro in their Piper Comanche 180 C-FYHU, on May 12, 2014 and are now in Djakarta.
Their flight is in support of Toronto’s SickKids Hospital Foundation and Scotland’s Charity Air Ambulance.
http://www.flyrtw80.com/
Facebook FlyRTW80
Twitter @FlyRTW80

May 19, 2014:
In June 2014, father and son, Babar and Haris Suleman will set off from Indiana USA, to fly around the World in 30 days in a Beech Bonanza, N20TC.
They are hoping to break a number of world records but the main one will be the 'Youngest Pilot to Fly as Pilot in Charge around the World in a Single Engined Aircraft'. Haris is 17.
They hope to raise money for their charity, Seeds of Learning (SOL), a charity that sends under-priviledged children to school in the poorest places around the world.
https://www.facebook.com/groups/578058208947616/

May 18, 2014:
Mr. António Veladas is announcing a double RTW from both Timor and from Portugal to mark the 500th year since the arrival of the Portuguese in Timor Leste.
http://2015timorportugal500anos.wordpress.com/

May 16, 2014:
Back from Moscow and Saint Petersburg and recovering.... a full report coming soon...
We had a wonderful meeting and once again many thanks to Sergey, Pavel and all who contributed to the sucess of the meeting...
Svasibo...

April 14, 2014:
Earthrounder in the making, Heinz Peier, after being forced to land at the Soewondo Air Base in Sumatra by the Indonesian Air Force, has finally been released after paying a hefty fine and is on his way to Seletar.
The "incident" has been reported worldwide:
Article in the Daily Mail
The Jakarta Post
The NY Daily News
Thank you Manuel Queiroz for getting the news...

From Yeow Meng, Group Managing Director & Founder of Wings Over Asia, FBO in Seletar WSSL (Singapore):
As our contribution to private aviation, I would like to offer all Earthrounders pilots a special 20% discount off our handling rate (for less than 3000kg aircrafts, it is only S$200 with additional 20% discount for full professional handling service) to welcome them to transit via Singapore and help promote private aviation here. And also since WingsOverAsia has it’s own self-managed GA compact parking area within the airport, we will also offer FREE aircraft parking to all Earthrounders pilot on a first-come-first-serve basis whenever there is space in our very own GA compact parking area.
Details of services
http://www.wingsoverasia.com/

March 23, 2014:
Do not miss Bulletin N° 6 with the latest information on the Saint Petersburg Meeting.

March 23, 2014:
Another challenger for the title of the youngest solo RTW:
From Matt Guthmiller: This summer I'm going to become the youngest person to fly solo around the world, and I just launched a Web site at Limitless-Horizons.org (also facebook.com/LimitlessHz and twitter.com/LimitlessHz). I'll be flying a 1981 A36 Bonanza and raising money for Code.org (they're a nonprofit working to put computer science education programs in K-12 schools).
Previous challengers:

March 19, 2014:
Fifty years ago, on March 19, 1964, Geraldine Mock was starting her RTW from Colombus (Ohio).She became the first woman to fly around the World solo in a Cassna 180.
From Wendy Hollinger: To help celebrate Jerrie Mock's 50th Anniversary as the first woman to fly solo around the world, please join us as we follow her "progress" 50 years ago. A special Facebook and Twitter account have been setup for this purpose and and each day, from March 19–April 17, they'll post updates of where Jerrie was, 50 years ago, on her record setting flight around the world.
https://www.facebook.com/Fly38Charlie?ref=hl

March 7, 2014:
From Babar Suleman:"Requesting information from Earthrounders who may have flown with 'dolly parton' tanks in an A-36 Bonanza and have loading and speed numbers. Please contact me at:babars@allscribe.com or call me at 317.809.4229 in the US. Would greatly appreciate it.”
Support education for the underprivileged….
http://www.razoo.com/story/Flying-Round-The-World-For-Education?referral_code=share


February 12, 2014:
Do not miss Bulletin N° 4 with the latest information on the Moscow visit prior to the Meeting:

February 3, 2014:
From Harry Anderson (RTW 2011):
I landed on King George Island (SCRM) on January 31 and returned to Punta Arenas the next day. I have now achieved my goal of solo flight in my single engine Lancair Columbia N788W to all seven continents.
I've posted a video on YouTube of the last few minutes of my approach and landing in Antarctica:
I'm looking forward to seeing all the Earthrounders at the reunion in Russia!
http://www.youtube.com/watch?v=9ks8QlUHJpk"

January 29, 2014 : An update from Dave McElroy on their RTW for SickKids and Scotalnd's Charity Air Ambulance: ....now scheduled to depart Toronto on May 12 for a Canadian RTW, and to depart Perth Scotland on May 19 for a Scottish RTW.
www.FlyRTW80.com

January 26, 2014 : From Dale Berger of Aero-Pro Avionics LLC:
Dr. Siwik (RTW 2008) has commissioned me to broker the Frank Haile Aluminum tip tanks for Bonanza that he owns.
Full details and photos