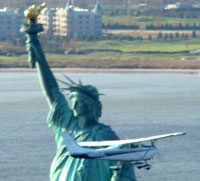 December 8, 2009 : Another Atlantic crossing and more for undefatigable Robert Gannon and Lady Luck II.
Click here to catch up on the latest (Austria, Russia, Alaska and more...)
Other Letters from Bob Gannon

November 12, 2009 : Melanie and Andreas Stütz have already clocked up several thousand kms in their project of flying all over the World in a Gyroplane. This will preclude ocean crossings. See their website. ...
http://www.worldflight.tv/ October 28, 2009 : From Wing Commander Rahul Monga: After a long wait and lots of hard work by my publishers, my book about the journey around the world in an ultralight (the trip was in 2007) has finally been printed. The title of the book is "Around the World in 80 Days" .
Though the official launch will be on 19th November at New Delhi, in case you are interested in buying a copy of the book, you can send a mail to Mr Jagdish Nair at knowledgeworld@vsnl.net with a cc to Jose Mathews at jose@kwpub.in. Payment can be made directly to the publishers.

September 27, 2009 : Some of our last entries are creating interest on collapsible ferry tanks. Received this from Turtlepac: For Collapsible Ferry Tanks look at www.turtlepac.com used by number of Earthrounders and commerical ferry pilots world wide. August 25, 2009 : Message recieved from Lindsay Howitt: We need a 140 US gallon Ferry tank for a PA-30 flying from California to New Zealand. Does anyone have one for sale or know where one can be fitted in Washington on west coast. Reply to: lghowitt@gmail.com

August 17, 2009 : The work of an Earthrounders webmaster is never done! Since our launch in 2000, we have been tracking down fellow Earthrounders from all over the globe, some recent ones, some way back. We had the pleasure recently to learn of a RTW flight made in 1959 by Dan Sorkin in his Apache with Frank Hansen. This admirable pilot subsequently has a very interesting tale to tell. Having lost a leg in a motorcycle accident, he founded a support group called Stumps R Us (www.stumps.org/) and takes amputees flying in his plane, boosting their confidence and putting a broad smile on their faces. Check him out on this link. www.youtube.com/watch?v=w8HacuhM03

August 10, 2009 : Congratulations to Earthrounders co-founder Hans Gutmann and his gaggle of ten aircraft for their successful flight around the World via Russia and Mongolia.
http://www.14east.at/
Full schedule (pdf form size=215 Kb)
Details

July, 22, 2009 : South African pilots Mike Blyth and James Pitman departed Johannesburg on 18th July in a South African designed and built D6 Sling ultralight aircraft.
You can follow them on www.airplanefactory.co.za/world/default.asp as they cross the Atlantic and head for Oshkosh.

July, 15, 2009 : FAI Round-the-World 2009. A group of 11 planes is currently flying round the northern hemisphere in a flight organized by Austrian Earthrounder Hans Gutmann. Bob Gannon is participating together with buddy Bob Bates from PNG. They are currently in Kazakhstan, soon headed for Mongolia.
You can follow them on http://www.pngtours.com/tours/fly.html

July, 14, 2009 : On July 11, 2009 Earthrounders Ralf Hannemann and Marga met an Earthrounder to be, Peter Huntley from UK at the airshow in Duxford. He is intending to leave for his RTW end of August 2009 in a Beech Baron, call sign N55UK.
Larger picture

July, 12, 2009 : Congratulations to Rolf Frieden and to Manfred Melloh for the successful completion of their RTW.
Rolf FRIEDEN (Swiss) and Manfred MELLOH (Australian) landed yesterday with their Piper Comanche PA24/260C
HB-PON on 12 July at 1618 LT (1418Z) at the cute little Swiss airport of La Cote (LSGP) near Gland on the north shore of lake Geneva, and completed thus their round the world flight which started on 18 June 2008 from the same place.
Their homecoming was appropriately celebrated with (lots!!) of champagne.
Earthrounders Angela and Flemming Pedersen (who both love both Earthrounder homecomings and champagne!) were there as well as many of Rolf's aviator friends. Great party!
http://blog.mailasail.com/comanche.hb-pon
Larger picture

June 30, 2009 : Message from Lauren Cooper of Learntoflyla: "Looking for adult standard IMMERSION SUIT, 1-4 person RAFT and HF radio for sale or rental. Wanted in Los Angeles area or will pick up in Canada. Thanks! .
Email: n9537q(at)gmail.com
Website: www.learntoflyla.com June 28, 2009 : Indefatigable Bob Gannon has spent the last couple of bouts of his timeless flying journey in the Middle East. It is always a pleasure to follow his steps with his occasional missives and photos.
Letter from the Middle East #2
Click here to catch up on the latest (North Africa)
Other Letters from Bob Gannon

June 15, 2009 : Next Earthrounders Meeting in Brasilia. Click here for details of the Programme

June 14, 2009 : From Rolf Frieden:"Bo Therkildsen, an excellent contact of an efficient, friendly, and reasonably priced "One Man organization", which can help pilots, to obtain overflight and landing permissions around the world."
Full details

June 8, 2009 : Message received from Sam Rutherford:
" Full 2008 trans-atlantic kit (Canada-Greenland-Iceland-Faroes-Norway), IFR and VFR charts, publications and plates, available free of charge to anyone prepared to pay postage from and back to Belgium."
Sam can be contacted on:+32 475 930232 or at: sam (at) prepare2go.com
www.prepare2go.com

May 23, 2009 : Due principally to the vagaries of global warming and changing weather patterns, it has been decided to delay the Brazil reunion in 2010 for a couple of months, from March (which was very rainy and gloomy this year) to May. New dates and a programme will be posted onto the Website shortly
Click here for information

May 22, 2009 : Rolf Freiden has a lot of complete Jeppesen Trip Kits, Plates and High/Low Altitude Enroute Charts for sale at 1/3 of the price.
SOLD

May 5, 2009 : Rolf Freiden and Manfred Melloh have reached Florida at the end of the third leg of their RTW.
http://blog.mailasail.com/comanche.hb-pon

April 29, 2009 : Yannick Bovier and Fransisco Agullo anounce their departure for an extensive RTW in 2010 with 2 CTLS light aircrafts Celine and Dreamcatcher.
www.azimut270.ch

April 16, 2009 : Congratulations to Andy Hopper for the succesful completion of his RTW in his Cessna 210 G-SEEK. He landed near Cambridge, UK on April 14, 2009.
http://live.adventuretracking.com/andyhopper
Andy's previous flights

April 8, 2009 : Detlef Heun & Liliana Tagliamonte announce their departure from Florida for their RTW in their RV7 N577DL They are now in the Caribbean.
www.flight-around-the-world.org April 2, 2009 : From CarolAnn Garrat and Carol Foy:
"We are now proud and happy to announce that the World Record has been ratified by the Fédération Aeronautique Internationale! As of March 16, 2009, our speed of 185.6 kilometers per hour, is the new Westbound around the World speed record for piston engine landplanes with take off weight 1000 to 1750 kg. "

March 29, 2009 : Andy Hopper on the second stage of his RTW diverted to Northam (YNTM) ,Western Australia, to meet Earthrounder Claude Meunier. His is on his way back to Europe via Singapore and Colombo. http://live.adventuretracking.com/andyhopper
Larger picture

March 22, 2009 : More news from Robert Gannon:
"Wanted to share my joy of flying Lucky Lady Too on a medical/humanitarian flight into Basrah, Iraq. In Iraq the cancer rate for children is 2%. In the Basrah area it is 10%. The Basrah Childrens Hospital is about to be completed to address child cancer. "
Click here for an article of the event
Courtesy "The Golden Nugget" in Iraq.

March 2, 2009 : Things are beginning to move down in Brazil and for our next meeting we now have a venue, a date (albeit provisional) and some interesting ideas being banded around. Don't forget to keep Brazil in mind for 2010. Crisis or no crisis.
Click here for information

February 3, 2009 : We have received this latest report on Bon Gannon's travels through a number of countries in the Middle East. Always fascinating.
Read more:...

February 3, 2009 : From Rolf Freiden in Tahiti:
"Manfred and I have decided to end the Stage 2 of our Round the world flight here in French Polynesia and return back to Australia and Switzerland respectively for some weeks to work, before we will continue Stage 3 to Easter Island, Santiago in Chile, Peru, Equador, Panama, the Domenican Republic, the Bahamas, and finally to Florida USA. "
http://blog.mailasail.com/comanche.hb-pon

January 23, 2009 : Rolf Freiden and Manfred Melloh have started the second half of their RTW from Coolangatta (Queensland) and are now in Rarotonga (Cook Islands). Their flight can be followed on Mailasail: http://blog.mailasail.com/comanche.hb-pon

January 4, 2009 : Andy Hopper has started his RTW from the UK in a Cessna 210 on December 31, 2008 and he is now in Recife. His progress can be followed on the Yellow Brick tracking.
http://live.adventuretracking.com/andyhopper
Andy's previous flights