December 21, 2007: Earthrounders.com wishes a Merry Christmas and a very Happy New Year to all Earthrounders, their families and friends. We hope you are coming to the South Africa Earthrounders Meeting March 4 to 9, 2008. See you there!
Happy landings, blue skies and fair winds

December 21, 2007: Norm Livingstone after the successful completion of his RTW
( www.around-the-world-2007.com/ ) is selling his Mooney Ovation 3 N667DL "Nang Fah" .
Click here for details.

December 11, 2007: Flemming and Angela Pedersen meet with Ricky de Angrela in South Africa. Ricky flew around the World in 2004 in weight shifting ultralight. Alan Honeyborne who was flying with him died when he crashed in China. Ricky has written a book: "Freedom Flight".
http://www.safreedomflight.com/
Larger picture

December 6, 2007: During the Australian part of their RTW, Marga and Ralf Hannemann visited Earthrounder Claude Meunier in Northam (YNTM), in Western Australia. After an adventurous chase, they managed to replace a faulty starter motor and are now on their way to the East Coast of Australia and the Pacific Ocean.
Fair winds and blue skies...
www.geier-flyer.com/GeierFlyerUK/index.php
Larger picture
D-GHAN
D-GHAN (High definition ,162 Kb!)

December 6, 2007: Congratulations to Norman Livingstone (Norm) and Vajee Misakawan (Lec) for the successful completion of their RTW with their Ovation Nang Fah. They landed yesterday at Boundary Bay, Vancouver, Canada, where they started in May.
www.around-the-world-2007.com/
Larger photo

December 1, 2007: Flemming and Angela Pedersen are already in South Africa, meeting with Dorise Hettlich. They are drinking to the memory of Frank on Heldeberg mountain..
They were impressed by the beauty of the Site for the next Earthrounders Meeting.
Larger picture

November 8, 2007: A few days ago, in Belém, on an arm of the Amazon delta, Gérard Moss met up recently with on-going slowly-but-surely Earthrounders Gregg and Rebecca Bartlett
www.cheekymooney.com


October 30, 2007: Ralf and Marga Hannemann have left Germany on October 27 and arrived yesterday in Luxor, HELX, flying tomorrow to Manama/Bahrain, OBBI.
Wishing them fair weather all along.
www.geier-flyer.com/GeierFlyerUK/index.php

October 14, 2007: Good to hear from Robert Gannon who writes from the Galapagos. He is now in South America with Lady Luck Too.
Read Robert's letter with photos

September 26, 2007: Dave Vanderspuy of African Aero Safaris reminds us of the need to book early for those of us interested in a Flying Safari before or after the South Africa Earthrounders Meeting.
www.aerosafari.com

September 25, 2007: Morten Sondergaard announces his departure for a RTW from Mallorca in Spain on November 3rd 2007, with friends in a PC12,
Wishing them fair weather and fun.
http://www.smilingflyer.com/

September 21, 2007: Ralf and Marga Hannemann will depart for their RTW in October 2007 in their specially built Partenavia D-GHAN "Geier-Flyer".
Wishing them fair winds and great weather.
www.geier-flyer.com/GeierFlyerUK/index.php

September 18, 2007: Congratulations to Uwe Thomas Carstensen for the successful completion of the second part of his RTW in "the rose-painted" aeroplane, "Marie", Cessna 206 D-EMCA, with Hans Christian Albertsen as co-pilot for the second half of the RTW. They landed at Hannover Airport on September 14.
www.globeflight-rallye.com/en_start.php
Larger photo 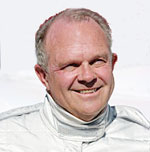 September 9, 2007: Fellow Earthrounder Steve Fossett is still missing, despite a massive search launched in the deserts of Nevada where he disappeared 6 days ago. Every day we have been hoping that we could publish a note with some positive news: we continue to hope he will be found soon. 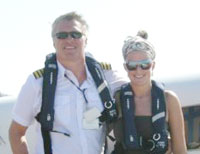 August 19, 2007: Congratulations to Wing Commander Rahul Monga and his co-pilot for the successful completion of his RTW in an ultralight in 80 days. His will be claiming a new World record.
Larger picture

August 22, 2007: Wojciech Mirski, after the successful completion of his RTW in his Comanche ( www.flying-doctor.ch ) is selling a lot of survival gear.
Click here for full details.
mirski@bluewin.ch

August 12, 2007: Just received great news from Norm Livingstone. After being close to have to abandon, he finally got the insurance coverage he wanted and he is continuing his RTW. It seems that insurance is becoming more and more difficult to get. Good luck and fair winds.
www.around-the-world-2007.com 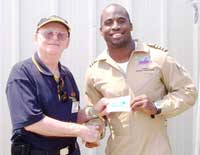 August 9, 2007: Back from Airventure in Oshkosh and other places in the USA where I had the pleasure of meeting Barrington Irving and several other Earthrounders and Earthrounders to-be.
More pictures

August 6, 2007, 2007 Earthrounder Manuel Queiroz welcomed Rahul Monga of the Indian Air Force and his co-pilot Anil Kumar as they pass through RAF Base at Halton (UK). Yesterday they flew from Iceland to Lossiemouth in Scotland. They are now flying to Berlin.
Larger photo

July 23, 2007: We are distressed to have to report that veteran Swiss Earthrounder HG Schmid died today in a crash shortly after take-off from Basle airport for what would have been a record-making flight of 8,000 km direct to Oshkosh. Our deepest sympathies go to Sibyl and their two children.

July 20, 2007: Wing Commander Rahul Monga of the Indian Air Force is doing well in his ultralight aircraft. He is now in North America. This photo was taken in Nome (Alaska).
Larger photo


July 19, 2007: Congratulations to Farhad Rostampour and Arshid Moti-Ghavanin for the successful completion of a remarquable RTW. They landed yesterday July 18 at 1 p.m. at the Donaldson Jet Center, Greenville SC
http://freedomflight.info/en/index.php

July 16, 2007: Oshkosh Airventure 2007. Your faithfull Webmaster will be happy to meet you at the International Tent, everyday towards 12.00 noon.

July 1, 2007: Congratulations to Wojciech Mirski for completing successfuly his three-part RTW. He landed at La Chaux de Fonds (Switzerland) Saturday at 3.00 PM (with wheels down). Earthrounders Flemming and Angela Pedersen, friends and family were there to welcome him.
More photos.

June 29, 2007: A mini reunion of Earthrounders and Earthrounders-to-be in Sydney, Australia.
Left to right: Graham and Lisa Harvey (they are building a RTW Glasair), Claude Meunier (RTW 1996) and Nicolas Perren (RTW 2006).
Larger picture 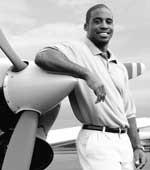 June 28, 2007: Congratulations to Barrington Irving for the successful completion of his RTW, becoming as our records indicate, the first person of African descent and the youngest solo pilot to have done it. He landed on Wednesday 27, at Opa-locka airport in Florida.
http://www.experienceaviation.org/
Landing picture

March 7, 2007: The bonds of friendship that have developed as a direct result of the Earthrounders were all too apparent to Gerard and Margi Moss in the last week of February when they had direct contact with no less than 10 fellow Earthrounders. It began tragically with directly accompanying, hour by hour, the Search and Rescue ops for Frank Hettlich, who came down in the ocean off Brazil. Earthrounder Hans Kampik, Honorary German consul in Belo Horizonte, lent valuable assistance with the subsequent bureaucracy. A few days later, in Rio de Janeiro, a reunion brought together Bob Gannon and Aida, Jennifer Murray and Colin Bodill, where there was much sadness that Frank was not there also, as had originally been planned. Later that week, in Europe, the Mosses had a chance encounter at Lausanne airport with Bertrand Piccard, dined in Divonne, France with Flemming and Angela Pedersen and spent a day in and around Vienna with Hans Gutmann. On each occasion, a glass was raised in Frank's honour.
More photos from Rio and from Vienna

March 6, 2007: Renny Shapiro announces the publication of her book: Eastbound.
"A true-life account about the romance of word flight,..." Details:

February 26, 2007: Earthrounder co-founder and Webmaster, Claude Meunier flew yesterday to Parafield ( near Adelaide, South Australia) to welcome Jens Abilgaard Hansen, who, as you can see from the smiles, was eventually permitted to continue his journey through Australia, contrary to the expected outcome mentioned below
www.hosbiz.com
More pictures.

February 25, 2007: After many months of preparation, Barrington Irving, is ready to start his RTW in a Colombia 400. He plans to leave Miami on March 23. Fair winds.
www.experienceaviation.org/default.asp

February 21, 2007: After having his aircraft detained for 3 days in Broome, Western Autralia, Danish pilot Jens Abildgaard was permitted to continue his RTW flight as far as Darwin in order to exit the country to Papua New Guinea. In contradiction with the Chicago Convention and in an unprecedented manner, Australian Customs in Broome decided to impose import duties on visiting light aircraft and told Jens he would have to fork out about 30,000 dollars which would be reimbursed after leaving the country. Until depositing the money, he would not be allowed to fly. Good-natured Jens even agreed to go through with this absurdity, but to top it all, having set this rule, the Customs themselves did not know how to impose it - i.e. how to collect the money and then return it. Australian Earthrounders closed ranks to try to help, but the bureaucrats were immovable. We strongly suggest that any other potential Earthrounder who is heading for Australia should double check before being subjected to the same ridiculous impositions, which do not exist in any other country in the world. It is a sad day for aviation when such a spacious country as Australia, so perfect for travel by light aircraft, has to be struck off the map for visiting Earthrounders. We sincerely hope that this situation will be revised, but it will be too late for Jens.
www.hosbiz.com

February 17, 2007: Two hours after leaving Natal, Brazil for Dakar, Senegal today, Earthrounder Frank Hettlich had an engine failure in his Seneca3. Although he survived ditching in the ocean some 40 miles from Fernando de Noronha Island, and made it into his life-raft, he has tragically perished as a result of injuries. Frank and his wife Dorise had recently been travelling in Brazil, Argentina and Chile on holiday but he was undertaking the Atlantic crossing back to Africa alone, headed eventually to Capetown. Our heartfelt condolences go to Dorise and daughters Malaika, Bianca, Claudia.


February 2, 2007: Danish pilot Jens Abildgaard has been so inspired by learning to fly and going places that he has set off already on a RTW flight and reached Mumbai, in his Cessna 182, before we even knew about it
www.hosbiz.com

January 20, 2007: Sebastian Rothammel of Bremen/Germany announces another RTW. He will be co-pilot to Uwe Thomas Carstensen and they plan to leave Hannover on March 14, 2007 with a white Cessna T206H Turbo Stationair with big red roses on the side.

January 14, 2007: Edmundas Ganusauskas annouces the publication of his book: "Po Sparnu Zene", ( "Beneath the wing: the EARTH"), describing the flight of Mr. Rolandas Paksas and Vladimir Makagonov . So far it is only in Lithuanian.
Details:

January 1, 2007: Earthrounders.com wishes a very Happy New Year to all Earthrounders, their families and friends. We hope you are putting South Africa on the agenda for 2008. See you there!
Happy landings and fair winds