December 24, 2011: Another mini Earthrounders Meeting when CarolAnn Garratt stops in Bang Phra to meet Norn Livingstone and Tom Claytor.
She is spending Christmas with Norm Livingstone and Vajee Misakawan in Khao Yai, Thailand.
Click here for larger photos or click on each thumbnail photo for a larger one...


December 6, 2011: Congratulations to Harry R. Anderson for the completion of his RTW in a Lancair Columbia N788W. He landed in Montery CA on December 4, 2011.
http://blog.travelpod.com/travel-blog/harry4123/1/tpod.html December 5, 2011: Double Earthrounder Gérard Moss was honoured with an MBE at Buckingham Palace on November 18, 2011 for services to the environment in Brazil. It is worth noting that whilst he works on environmental projects, there is always an aircraft of some description involved in his work, be it collecting water samples with an amphibian or air samples with a conventional single-engine. Only by aircraft is it feasible to carry out such research nation-wide in such a large country.
Larger photos

November 18, 2011: From Islam Abd El Hamid: I am going to fly around the World with my well equipped Piper Aztec sometimes this spring and I need 1 or 2 co-pilots to joing me and share the expenses and the experience. If interested please email me at islam_cis@hotmail.com or call me at my canadian cell +1647-860-1819

November 12, 2011 Harry Anderson is now in Darwin Australia with his Lancair Columbia.
http://blog.travelpod.com/travel-blog/harry4123/1/tpod.html

November 6, 2011 Congratulations to Bob Jeffery who just completed on Nov 1st his 4 month RTW in his Twin Comanche including the International Comanche Society group fly-in to AirVenture, Oshkosh and the ICS Annual Convention at Savannah GA in September

October 13, 2011: Aircraft Ditching yesterday en route Hawaii. Perhaps something to learn from:
Article and video:
http://www.staradvertiser.com/news/breaking/131369148.html
With thanks to Bob Gannon.

October 10, 2011: From White Rose Aviation : News on availability of Avgas in India.
Details

September 25, 2011: Congratulations to James Pitman and Jean D’Assonville for the sucessful completion of their RTW in a Sling 4 ZU-TAF in 48 days. They landed at Tedderfield, South Africa on September 24, 2011.
www.airplanefactory.co.za/sling4atw.asp

September 22, 2011: Heinz Peier has a ferry tank for a Mooney.
Details

September 21, 2011: Detlef Heun and Liliana Tagliamonte are in Sosua, in the Dominican Republic and have made a film of their travels. Here is a trailer:
www.DL-Pictures.com
www.flight-around-the-world.org

September 14, 2011: Congratulations to Patrick and Linda Elliot for the successful completion of their RTW in their Long E-Z on September 11, 2011
http://www.travelpod.com/travel-blog/eskimo/1/tpod.html

September 12, 2011: From Manuel Queiroz: Last Tuesday Arnim Stief called in at the main Cirrus service centre in the UK, RGV, where I help in the avionics department – so we had an impromptu Earthrounders mini-meeting! This only happened because I recognised him from pictures of Earthrounders.com, thank you Claude!
Larger photo

September 9, 2011: From CarolAnn Garratt and Bo Therkildsen: A new company to help with clearances in Egypt:
.www.gasupportegypt.com

September 9, 2011: From Helmuth Lehner : Announcing my planned RTW and looking for a second Crew in a fourseat plane to accompany me. I will fly with my microlight WT9 Dynamic, departing on 15th of April next year from Austria eastward, via Turky, Iran, India, Bangladesh, Thailand, Vietnam, China, Taiwan, Japan, Russia, Alaska, San Francisco, Florida, New Foundland, Azores Island, Portugal, Spain, France and Austria.
I would also be happy to find a second microlight for this trip, I will fly alone in my plane.
Happy to see you next in Florida at the Earthrounders Meeting.
Greetings
info@iwest.co.at

September 7, 2011: Congratulations to Forest Ward for the succesful completion of his RTW in Aerostar N601PE. He landed on saturday evening September 3 in Norfolk VA.
"We made it: 18 days and we spent 9 stuck in Adak and the Maldives."
http://www.RaceAgainstPolio.com

August 26, 2011: James Pitman, this time with Jean D’Assonville, is going around once more and is now in the Marshall Islands.
http://www.airplanefactory.co.za/default.asp
With thanks to Manuel Queiroz for the information

August 25, 2011: Congratulations to Peter and Kathrin Kappeler for the succesful completion of their second RTW. They landing in Bern, Switzerland after a westward RTW.
With thanks to Flemming Pedersen for the information August 9, 2011: Earthrounder Wayne Collins (RTW 1986, 1990) will be 87 year young on August 10. His daughter Cristle has created a Website where we can log good wishes for his birthday in a web memory book.
https://sites.google.com/site/waynecollins87th/
We are all invited to send Wayne our greetings.
Happy Birthday Wayne...

July 30, 2011: Congratulations to Wei Chen for the completion of his RTW in a TBM700. He is the first Chinese national to have flown around the World and the first to have been allowed in to fly in China.
He landed yesterday in Memphis, TN
http://www.weiaroundtheworld.com/

July 7, 2011: Wei Chen announces his landing at the Huanghua Airport near Changsha in Hunan, China, a milestone in China GA history. The first private single engine aircraft from a foreign country to land in China.
Hoping this will open the way for others?
Larger map
Follow his track from Hong Kong on Spidertrack:
http://www.weiaroundtheworld.com/

June 27, 2011: Congratulations to Ralf and Marga Hannemann for the completion of their second RTW.
They landed at Bayreuth on June 25 after 88 days covering 24 714 NM in 193 hours.
Larger photo
http://www.geier-flyer.com/ June19, 2011:
It is with immense sadness that we learn that Hans Gutmann, much respected founding member of our Earthrounders community, died in an aircarft accident while flying in the Italian Apennines on Saturday. Hans was at the forefront of everything that the Earthrounders has become, his enthusiasm for flying and taking on new challenges knew no bounds.
His death is a tremendous loss to us all, his unfailingly good-natured spirit will be much missed at our bi-annual encounters.
Whilst we lament the loss of a dear friend, our sincerest condolances go to his wife Elizabeth and daughter Eva.
Auf Wiedersehen, Hans.

June18, 2011: Six RTW are "in progress" and doing well:
Wei Chen is in Dubai: http://www.weiaroundtheworld.com/
CarolAnn Garratt is in the UK: www.alsworldflight.com
Ralf and Marga Hannemann are in the US: http://www.geier-flyer.com/GeierFlyerUK/tourstravels/roundtheworld2011/index.html
Norman Surplus is in the Philippines: http://www.gyroxgoesglobal.com/
Detlef Heun and Liliana Tagliamonte are in the Bahamas: www.flight-around-the-world.org/
Patrick and Linda Elliott are in Nova Scotia: http://www.travelpod.com/travel-blog/eskimo/1/tpod.html

June13, 2011: Mickey Russell is announcing his "Round the World Flight over both Poles" with Jay Jones. Departure is expected in November-December 2011.
http://www.worldflyers.org/

May 22, 2011: Forrest Ward is announcing a future RTW in his Aerostar N601PE.
www.RaceAgainstPolio.Com

May 22, 2011: Justin Collins is announcing his upcoming RTW flight in a Spitfire, raising money for the Children's Heart Foundation
http://www.spitfireworldchallenge.com/

May 15, 2011: Ralf and Marga Hannemann are now in Hawaii.
http://www.geier-flyer.com/GeierFlyerUK/tourstravels/roundtheworld2011/index.html
Larger picture May 15, 2011: From Flemming Pedersen in their new Airparc in France:"CarolAnn Gerratt started her third round the world flight (duration ~12 months) from her home at Flying Tiger airport in Florida on 22 April 2011.
It is known that RTW flights can be addictive!
Larger photo
Follow her on:
www.alsworldflight.com
and
www.facebook.com/pages/Dash-for-a-Cure/148572991861368

May 9, 2011: Congratulations to Thom Kane for the succesful completion of his RTW in his Cessna 180. He landed home in Florida yesterday at 6:30 PM.
From Veronica Baird: None of this would have been possible if we hadn't gone to your meeting in Brasilia. So thank you, and the rest of the Earthrounders, for your information, encouragement and friendship.
Thom's Cessna 180 N6TK

April 26, 2011: From Douglas Cairns:I'm delighted to report that Diabetes Polar Flight was a great success on Tuesday/Wednesday 20th/21st April. The weather was on our side all the way from Barrow to the North Pole and after finding Barneo Ice Camp just 30 miles from the Pole the Baron endured a bumpy landing on a bulldozer-prepared strip, followed by some warm Russian hospitality.
Full report on: www.diabetespolarflight.org

April 13, 2011: Received from Earthrounder Douglas Cairns:
I'm just about to set out on my next diabetes flying project, Diabetes Polar Flight, which will set a speed record from Barrow, Alaska to the North Pole, any time from Sunday 17th April onwards.
This is going to be a terrifically exciting project! Details are up on www.diabetespolarflight.org where you can follow progress via a Spidertracks GPS tracker link, and two-hourly Hompeage updates via satellite phone relays........
Read Doug's full message
Note: Doug flew around the World in 2003: www.diabetesworldflight.com/

April 3, 2011: Stephan Armstrong and his son announce their RTW in their RV-8, N495RV.
www.Flying-for-the-Cure.org

March 7, 2011: Ralf and Marga Hannemann announce their departure on March 30 from Bayreuth, EDQD in Germany for their second flight around the world with D-GHAN. This flight is dedicated to two charity projects under the slogan "A healthy Smile connects People".
www.geier-flyer.com

February 22, 2011: Warning for pilots who might be planning on crossing the Pacific via Easter Island. It is highly possible that Avgas will no longer be available, not even on order, so please check thoroughly.
Latest on Easter island 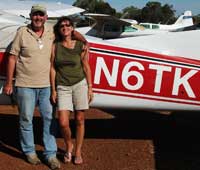 January 27, 2011: Thom Kane and Veronica Baird paid a visit to Earthrounder Claude Meunier in Northam (YNTM) Western Australia on their way around the World.
More photos

January 10, 2011: Congratulations to Bob Gannon who landed at Gillespie Field on Saturday 8, completing his 10 years RTW.
Article and photos of the arrival: http://santee.patch.com/articles/pilot-returns-to-gillespie-field-ten-years-and-155-countries-later#photo-4365732
Follow him in his epic journey around the World: Letters from Bob Gannon


January 7, 2011: STOP PRESS!
Bob Gannon will be landing on January 8 at noon in at Gillespie Field in El Cajon (near San Diego) where he took off from 10 years ago).

Congratulations Bob. It is with great pleasure that Bob's name will be moved out of the "slowly but surely" section and into the Earthrounders section. Bob will be our host in Florida in 2012.
Follow him in his epic journey around the World: Letters from Bob Gannon
Here is an article from Monday's San Diego newspaper: http://www.signonsandiego.com/news/2011/jan/03/after-a-decade-aloft-ready-for-a-landing/