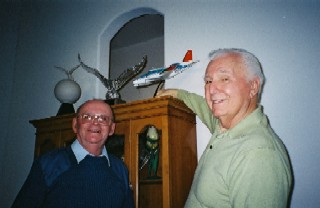 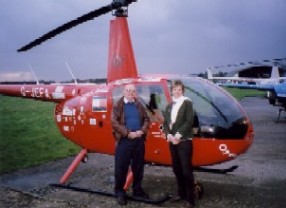 December 5, 2005: On his way to and from Mexico, your faithful did meet two very famous Earthrounders that could not join the Fiesta: Elgen Long in Reno (thanks to Bill Charney) and Jennifer Murray in London.
Elgen Long was the first pilot to fly solo around the World in 1971 via both Poles in his Navajo "Cross Roads Endeavour". Elgen and his wife Marie wrote a famous book on the diseapearance of E.A.: Amelia Earhart: The Mystery Solved.
Jennifer Murray flew twice around the World in her Robinson 44 helicopter in 1996 and in 2000. She is planning another helicopter flight via the Poles. http://www.polarfirst.com/

The Mexico Meeting, day by day: 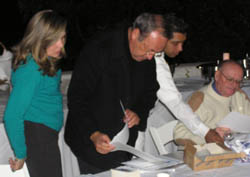 Sunday November 27, 2005: Guided tour of the City. In the evening, closing candlelit diner in the garden at Jorge's and Malu's mansion. Food and drinks were sumptuous. Attendance certificates and silver medals were awarded to all who registered in time and the Earthrounders' flag was presented to Hans Gutmann who will pass it to Frank Heittlich, the organiser of our next meeting to be held in 2008, in South Africa. Heartfelt thanks to Jorge and Malu Cornish for organising an excellenet reunion in a fascinating city and thanks to all who attended.

November 26, 2005: Colours and colour rules in Mexico.
The pyramids at Teotihuacan used to be brigthly painted, like the house of artists Frida Kalho and Diego Rivera we visited today. After a stroll in San Angel market, we headed for the flower boats at Xochimilco for a highly amusing punt on the canals, serenaded by Mariachis. And then another round table, this time in the pub! November 25, 2005: Teotihuacan, City of the Gods- our destination today just outside the city, where the magnificent pyramids of the Sun and the Moon soar above the Avenue of the Dead. In the thin air (at 8,000 feet) and strong sunlight we scrambled 70 metres up the pyramid before lunch in the chilly depths of a nearby cave. Back in Mexico, another evening session raised more questions and tips on flying around the World. 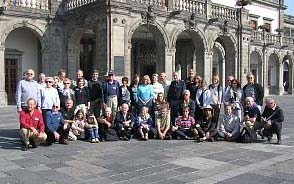 November 25, 2005: Blue skies over Mexico City at this time of the year. In the Winter sunshine, Earthrounders and company visited the splendid Chapultepec Castle and the breath taking Anthropology Museum before adjourning for a late brunch at El Lago. The Earthrounders Round Table kicked in that evening, with a buzzing exchange of information gleaned from past circumnavigators and the constant change of rules, regulations and Avgas supplies around the World. November 24, 2005: After registration and get-together, we had a sparkling view of Mexico City. That was the treat on the opening night of the 2005 Earthrounders Meeting. Not from an aeroplane as you might think, but from the 51st floor of the Torre Mayor, the tallest building in South America. Earthrounders were welcomed to Mexico City by Jorge and Malu Cornish and the Instituto de Turismo del Govierno del Districo Federal and by Aero Eventos Mexicanos.

November 15, 2005: Another RTW flight will start in March 2006 and will be in the interest of hearing impairment, the project is called “World Flight for Hearing” and will last for 5 months going eastbound.
http://www.worldflightforhearing.com

November 5, 2005: News received from Armin Stief and Markus Heinkell of their RTW in a Cirrus. They left Egelsbach near Frankfurt in Germany for Melbourne in Australia where they expect to arrive on November 17th. The second part of their RTW will start in April 2006.
http://www.n-flight-enroute.com

November 5, 2005: The Indian Air Force is planning a circumnavigation of the world in a Super Dimona motor glider starting April 2006.

November 3, 2005: Stephan and Nicolas Perren of "The Spirit of Davos" arrived in Sydney, closing the first part of their flight.
http://www.spirit-of-davos.ch

October 30, 2005: Barrington Irving is announcing his departure on May 4, 2006 for his RTW in a Columbia 400. He hope to become the first African-American to fly solo around the world and the youngest of any race. He is looking forward at meeting other Earthrounders along his route.
http://www.experienceaviation.org

October 21, 2005: Gus McLeod's latest attempt to circumnavigate the globe over both poles had another setback last week.He had mechanical problems after take-off from Maryland's Montgomery County Airpark.
In February 2004, he made it within 500 miles of the South Pole before his Firefly iced up and he was forced to turn back.
In 2000, he set a world record for a flight to the North Pole flying a open-cockpit Stearman.


September 27, 2005: Stefan and Nicolas Perren announce their departure within a few days from Switzerland on a RTW in their Mooney HB-DGL. Their aim will be to stimulate awareness and support for research on Osteoporosis.
http://www.spirit-of-davos.ch

September 17, 2005: News received from Maurice, the Flying Vet, indicates he is still going well (between court appearances in the UK). He is in Yang Yang, Korea and ready to fly to Russia in his 1943 Piper Cub.

August 27, 2005: Sandi Smith describes her RTW with Dr. Jay Merten in 1995 in her new book: FOLLOWING AMELIA
Details on how to order

August 25, 2005: Congratulations to Peter Moore and his team for succesfully completing their RTW in King Air VH-HPX
www.moorefilms.com.au
Click here for the DVD of the Flight

August 12, 2005: I had the great pleasure of meeting many Earthrounders and Earthrounders-to-be at the Airventure 2005 at Oshkosh.
A few photos, with apologies to other Earthrounders I did not meet.
CM

August 11, 2005: KingAir VH-HPX spotted at some secret location in Switzerland.

July 29, 2005: Peter Moore and his team seen at Oshkosh Airventure.

July 12, 2005: Peter Moore will be leaving Sydney, NSW, this week, in a Beechcraft 200 KingAir for a RTW via Easter Island and Oshkosh.
Good luck and fair winds

May 28, 2005: Douglas Cairns writes about his experience as the first person with Type 1 Diabetes to fly around the world.
Details
Order from:http://www.diabetesnet.com/


May 27, 2005: Congratulations to 76 year old pilot Bill Randolph who touched down at Watsonville Airport in California at 5:21 local time, completing his solo around the world flight.
http://www.eaa119.org

May 19, 2005: Bill Randolph and his RV8 N878DZ at Magenta Airport NWWM (New Caledonia) caught on camera by one of our spies. Bill is flying RTW eastward and is now in Samoa.
http://www.eaa119.org

May 16, 2005: Welcome to a new entry in the Earthrounders Singles listing:
2001: Lloyd Harmon with Bill Clark, Mooney Ovation.

May 9, 2005: Two Earthrounders, both from California, are in Darwin, NT, Australia, flying in opposite directions!
Dean Stahr : http://www.geocities.com/g-ellen@sbcglobal.net/frontpage.html
Bill Randolph: http://www.eaa119.org

April 17, 2005: It is with great sadness that we learn that quadruple Earthrounder Bob Reiss passed away this morning in California. Bob had certainly caught the earthrounding spirit: he was well advanced in preparations for what would have been a 5th RTW in his Turbo Bonanza. In addition to all his circumnavigations, he was a keen participant at Earthrounder meetings and active contributor to this Site. He will be sorely missed at our reunion in Mexico in November. Our sincere condolences to his family. April 14, 2005: GA Aviation details for those flying to the Mexico Meeting.
Details on the Mexico Program page

March18, 2005: Bill Randolph of Aptos, CA left Watsonville Airport, CA, on March 9th for his round-the-world solo flight in his homebuilt RV-8. He reached the coast of Africa when he touched down on March 16th at Dakar, Senegal.
Details are available at:http://www.eaa119.org

March 3, 2005: Ronald Deutch is planning to start a RTW flight in late May from the USA via Alaska and Russia to Ulaanbaatar, Mongolia. Remainder of flight will be in summer 2006. Looking for possible additional aircraft to accompany. He will fly a Jabiru J450 and cruise at 115 knots.
ronald_deutch@yahoo.com

March 1, 2005: Another ATW adventure is being planned, Eagle Flight Pilot Jared Aicher is preparing for a 2 stage flight around the World to promote the Young Eagle program.
http://www.theeagleflight.org/

February 7, 2005: Double Earthrounder Gérard Moss, who in December finished a unique environmental project using a Lake Renegade seaplane to test water quality all over Brazil (for which he has won an environmental award), gave a talk on the project to some 200 surprised Lake aircraft owners in Winter Haven, Florida at their annual convention. Images of jungle flights up tributaries of the Amazon made a change from the usual stories of flights to Alaska and Canada.
Larger picture

January 29, 2005: Multiple Earthrounder (he's done it by plane, balloon and boat) Steve Fossett is aiming for another record-breaking flight, a non-stop circumnavigation unattempted by aircraft since Rutan and Yeager's first magnificent accomplishment in the Voyager in 1986. Departure date sometime in February.
http://www.virginatlanticglobalflyer.com

January 29, 2005: Despite crashing into icy water on their first attempt to reach the South Pole in a Robinson 44 helicopter in February 2003, Englishmen Steve Brooks and double Earthrounder Quentin Smith have now sucessfully made it, becoming the first to land an helicopter on both Poles.

January 23, 2005: Maurice Kirk, the "Flying Vet", arrived in Australia participating in the London-Sydney race in 2001 in a 1943 Piper Cub. He still intends to close the circle some time. http://www.kirkflyingvet.com/

January 14, 2005: Bill Randolf, 76 of Aptos CA. plans to depart on January 30 from the Watsonville Airport for his RTW in his amateur built RV8.
More details on the Santa Cruz Sentinel on:
http://www.santacruzsentinel.com/archive/2005/January/09/local/stories/01local.htm
Photo courtesy The Santa Cruz Sentinel