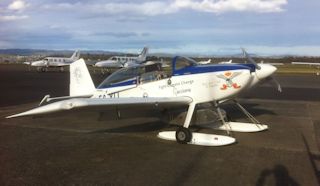 December 15, 2016:
Sincere congratulations to Miguel Gordillo for the succesful completion of his very long flight around the World by the Poles. He landed in Madrid (Spain), greeted by dozens.
http://www.skypolaris.org/
https://www.facebook.com/cielopolar/
Larger photos 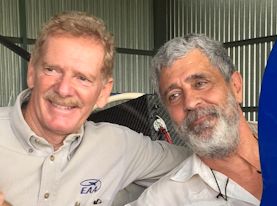 December 11, 2016:
Spanish Earthrounder Miguel Gordillo passed through Brasilia on his way homeward bound in his RV-8 after flying across Antartica and the South Pole. In Brasilia, he was the guest of Gerard and Margi Moss, and gave a presentation to local pilots about his amazing transpolar flights.
Larger photo
http://www.skypolaris.org/
https://www.facebook.com/cielopolar/ December 5, 2016:
We wish a Merry Christmas and a very Happy New Year to all Earthrounders, their families and friends and all Earthrounders-to-be.
Happy landings, blue skies, Peace on Earth, tail winds and all this kind of good things....
Hope we can all meet again, this time probably in China....

November 14, 2016:
At the Zhuhai Airshow, Wei Chen giving Julia Wang the award of 1 million Chinese Yuan, after her solo RTW.
With the Earthrounder flag in the background.
Larger picture


November 13, 2016:
Congratulations to Capt. Hank Cheng for the successful completion of his RTW in "Inspiration" , the first amateur built aircraft from Hong Kong, RV8 B-KOO.
He landed back in Hong Kong this morning at 0245 UTC.
With thanks to Mike Grey of White Rose Aviation for the good news.
http://www.inspiration.bkoo.hk/ November 3, 2016:
News from Sergey Terekhin, announcing a new Earthrounder: Soyuzbek Saliev - the first pilot from Kyrgyzstan - who successfully completed on November 1st, his westbound RTW in his Mooney Ovation 2, tail number EX 88003. His co-pilot was Jonas Juknius (on his second RTW). They departed from Bishkek and flew via UAE, Africa, South America, Easter Island.
Soyuzbek Saliev was at the Saint Petersburg Meeting.(left on the photo).


October 24, 2016:
From Debasish Banerjee: I set off on a RTW flight last summer (May 31st, 2016, to be precise) from Macon County Airport, NC, USA in my Cessna 182. Everything was going well and I went up to Ranchi, India. However, I had to abandon the plan b/c of the monsoon and the bad weather enroute that accompanied it all over SE Asia. So I came back home. I do hope to finish the circuit at a later time and with better planning to avoid bad weather enroute.

October 20, 2016:
Gone to Mount Hagen, Papua New Guinea, to the ninth Earthrounders Meeting... see you there...

October 16, 2016:
Miguel Gordillo departed Madrid (Spain) on October 1, 2016 for the second half of his second RTW in his amateur-built RV-8, EC-XLL.This time via the South Pole. He is now in the Maldives Islands (VRMG).
http://www.skypolaris.org/ September 30, 2016:
Congratulations to Jingxian Chen, aka Saki Chen for the successful completion of her RTW on a Bonanza N19MT. She landed at Cleveland CGF on September 27, 2016 where she took off from. With her were Amanda Lincoln, Laurence Rohl and Richard Rohl.
Larger picture

August 31, 2016:
Congratulations to John and Hallin Giddens of Singapore for the successful completion of their Westbound RTW in a TBM900, N755JG, from June 2 to August 17, 2016.
Thanks to Ng Yeow Meng at Wings Over Asia, for the information.

August 30, 2016:
From Adam Broome after visiting Wayne Collins in Mineola, TX :
"Wayne,
It was a treat to visit with you yesterday at the Earthrounders Regional Headquarters in Mineola. Thanks for your hospitality! "
Larger picture.

August 27, 2016:
Congratulations to Lachlan Smart for the successful completion of his RTW in a Cirrus VH-IBC. Lachlan is now the youngest solo Earthrounder at 18 years and 21 days of age, beating Matt Guttmiller, the previous record holder for the youngest pilot around the World.
http://www.wingsaroundtheworld.com.au

August 26, 2016:
Congratulations to Joe McMillen for the succesful completion of his "first" RTW. He flew a Cirrus SR22T from San Diego to San Diego (May 9 to August 24).
aviation.holua.com

August 19, 2016:
Many thanks to Harry R. Anderson for pointing out this new RTW, in what is probably the smallest Amateur-built aircraft, a KR2, G-BYLP.
Pilot is Colin Hales from the UK and is presently in Anadyr, Siberia.
Gool luck and fair weather all along.
http://www.kr2worldtour.com/ 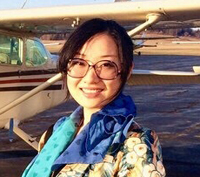 August 10, 2016:
From Saki Chen, aka Jingxian Chen, 31: "Forgot to update you that we have launched our trip on 8/1 and arrived in Paris already. Below is the link that u can trace our flight."
https://share.delorme.com/RichardRohl

July 26, 2016:
Congratulations to Bertrand Piccard and André Borschberg for the successful completion of their solar powered RTW with their Solar Impulse, the first Round-the-World solar flight in history. They landed in Abu Dhabi at 12,05 UTC.
Details

July 24 , 2016:
Congratulations to Adam Broome of Chapel Hill for the completion of his RTW in his Beechcraft Bonanza A36, N5831R (31Romeo). He departed Durham, NC on April 25, 2016 on an Eastbound RTW and landed back home on July 21, 2016.
www.GreatCircleFlyers.com
More pictures

July 23, 2016:
Congratulations to Russian adventurer Fedor Konyukhov for the successful completion of his solo RTW in a Cameron Rosiere Balloon. He beats the 14 year old record set by Steve Fossett in a similar balloon by one day. Fedor has to cross life threateneing thunderstorms and the southern Jet Stream took him as low as 61°S with temperatures of -50°C. It is a miracle of precision in the forecast of the Jet Stream and upper winds that took him exactly where he took off 11 days earlier, overflying the Northam airfield (YNTM) in Western Australia. He landed at the confines of the Western Australia Wheat Belt near the town of Bonnie Rock (S30° 33', E118° 18') at 0820 UTC.
http://konyukhov.ru/en/index.html
More photos
There are excellent views of the landing on You Tube (Simply type: "Konyukhov".).

July 18, 2016:
Great news from our host in PNG, Bob Bates:
"PNG Visas can again be obtained on arrival for Australians passport holders and there is no longer a requirement to obtain them in advance. They are now issued on arrival in Port Moresby at no cost."


July 15, 2016:
Fedor Konyukhov is going well,. He is now in the southern Jet Stream and and passed north of New Zealand in his attempt to beat Steve Fossett's record solo around the world in a Rosiere Balloon. He is today (at 11.00 UTC) at 178° East and doing a ground speed of 162 km/h (87 knots).
Follow Fedor's track here 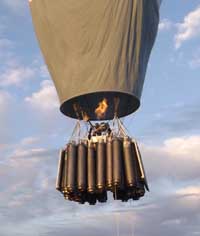 July 12, 2016:
A huge crowd saw Fedor Konyukhov take off from Northam, Western Australia, in his attempt to fly solo around the world in a Rosiere balloon. Present were Earthrounders Dick Smith and Claude Meunier.
http://konyukhov.ru/en/index.html
More photos

July 4, 2016:
Australian teenage pilot Lachlan Smart is ready to start his RTW from Queensland in a Cirrus VH-IBC.
http://www.wingsaroundtheworld.com.au June 17, 2016:
Russian adventurer and records holder Fedor Konyukhov and his team are putting the last touches for his attempt to break Steve Fossett's solo non-stop balloon flight around the world.
More pictures

June 13, 2016:
Joe McMillen announces his departure from San Diego on May 9th in his Cirrus SR22T, N8837Z.
He is now in Thailand with ignition harness problems.
Wishing him and his "First Officer", Jose Romero good luck and fair weather.
https://aviation.holua.com/trip/the-world-2016/

June 10, 2016:
Warm thanks to Bill Charney for photos of Hans Gutmann's monument in Northern Italy, at the site of the accident.
More photos of the monument June 10, 2016:
Congratulations to Rep. Steve Pearce for the completion of his solo RTV in a single engine aircraft. He departed Nevada on March 22 and finished on May 30 after a break in Congress.
He dedicated the mission to the memory of war veterans.
Thank you to Megan Wells for the information.
Larger picture

Fedor Konyukhov and his team are in Northam, Western Australia, getting ready for Fedor'a attempt to fly non-stop around the World in a Rosiere balloon.
Photo: Fedor Konyukhov with Claude Meunier.
Photo by Oscar Konyukhov.
Larger photo.
http://konyukhov.ru/en/index.html

May 17, 2016:
British aviatrix Tracey Curtis-Taylor and crew member Ewald Gritsch escaped unhurt when her Stearman, The Spirit of Artemis crashed shortly after take off from Winslow Arizona last week. This is a serious set back for her attempt to fly solo around the world. May 14, 2016:
Maximilian Lassacher will fly his Falconar F12 A Cruiser, WunderBird from New York to Austria and then "continue".
His aircraft will probably be the first aircraft fitted with a Mazda engine to fly around the world!
Larger photo

May 17, 2016:
British aviatrix Tracey Curtis-Taylor and crew member Ewald Gritsch escaped unhurt when her Stearman, The Spirit of Artemis crashed shortly after take off from Winslow Arizona last week. This is a serious set back for her attempt to fly solo around the world.

May 5, 2016:
Thank you to Bob Bates and Bill Finlen for letting us know of Adrian A. Eichhorn's RTW. He flies a restored 1962 P Beechcraft Bonaza N1733G, with tip tanks. Adrian departed Manassas VA, on April 10 and was in Sri Lanka on May 5.
http://flybluehorizons.com

April 26, 2016:
Congratulations to Michel Gordillo for the succesful completion of the first part of his third RTW. He started on February 19 and has landed in Madrid Cuatros Vientos.
http://www.skypolaris.org/
https://www.facebook.com/cielopolar/

April 25, 2016:
In a RTW with a difference, Swiss Earthrounder Bertrand Piccard and André Borschberg in their solar-powered aeroplane Solar Impulse2 have crossed the Pacific Ocean.
They took off form Abu Dhabi (Al Bateen Executive Airport, AZI/OMAD) in the United Arab Emirates on March 9, 2015 and have just landed in California.
http://www.solarimpulse.com/ April 22, 2016:
Congratulations to Matevz Lenarcic for the successful completion of his third RTW.
He departed Portoroz, Slovenia and landed back there today at 09:19 UTC.
You have a well deserved rest !!
www.worldgreenflight.com
More photos by Veronica Baird and Helmut Lehner
Photo of F_JAKG by Petra Draskovic Pelc

April 21, 2016:
It is with great pain that we just received news of the fatal accident which took the life of Mikhail Farikh and 2 others. They were flying a Robinson 66 helicopter in the Arcticas part of an expedition to find remains of the vessel "Svyatya Anna", which disappeared in 1912.
Mikhail flew around the World in his R66 in 2013.
http://vokrugsveta2013.ru/en
Our most sincere condolances to his family and friends.
With thanks to Sergey Terekhin for sending the sad news.
Also thanks to Roland Hurticant for this link: The Independent Barents Observer

March 12, 2016:
From Matevz Lenarcic: I would just like to inform you that will try to fly another solo RTW in ultralight Dynamic WT9, starting March 21st this year. West bound, northern hemisphere.
Black carbon research from previous 2012 RTW and North Pole 2013 was very interesting so our GreenLight WorldFlight team decided for continuation 2016-2020.
More info on: www.worldgreenflight.com
Best wishes! March 2, 2016:
From Wilfred Taylor:I am saddened to report that Donald P Taylor (1st homebuilt and 1st class C1b around the world), passed away on December 2, 2015 in Las Cruces NM.
Don Taylor flew solo in 1976 in his T18, Victoria 76, N455T.
Our sincere condolences to his family.
Full size photo of Don Taylor and Obituary
Don's T18 in the EAA Museum. February 24, 2016:
Allie and Phil Dunnington are announcing their departure in May 2016, from the UK in a Beech 18 "Betty", G-BKGM, for a 3 years flight around the World, project "On the Beech".
Larger picture
http://www.gonewiththewind.uk.com February 22 , 2016:
Michel Gordillo has departed San Javier, Spain on February 19, 2016 for his Polar RTW in his RV8, EC-XLL and is now in Dakar, Senegal.
http://www.skypolaris.org/
https://www.facebook.com/cielopolar/

February 8, 2016:
From Marco Cavallaro: I want to fly around the world in a Beech 18 (twin Beech), trying to get one for this summer, if interested contact my mail or call Marco Cavallaro 210 316 3347, if no answer leave word, I am flying ,will get back to you.
Email: marcocavallaro777@gmail.com

February 1, 2016: Another very successful 'mini-Earthrounders' Meeting, mainly skyiing and telling flying tall stories at the Pederesen's chalet in Chambery, Switzerland. Their charming and warm hospitality is well known.
At a time, their were 12 RTW present...
Larger photo

January 22, 2016: From Tony Xue of Uaero China: The first Chinese RTW (Beijing to Beijing) will depart in June 2016 with Capt. Bo Zhang, Ph.D. (University of Illinois) as PIC. The aircraft was thought to be a DA42 but may be changed to a TBM700. Crew and route have not been finalised.
Larger photo