We wish a Merry Christmas and a very Happy New Year to all Earthrounders, their families and friends and all Earthrounders-to-be.
Happy landings, blue skies, low landing fees, tail winds, Peace on Earth, and all this kind of good things....
Hope we can all meet again, this time in Switzerland....

From Daniel Ramseier, our Host in Switzerland in 2020:
Please read the Switzerland Meeting News Letter N° 1.

December 17, 2019:
Sincere congratulations to Bill Harrelson for beating Max Conrad's record of 1961 with 19 hours and 28 minutes to spare.
https://www.6zqpilot.com/


December 8, 2019:
Jens Thamer from Bad Hersfeld (EDEN) Germany is in Jandakot, Western Australia, (YPJT) on a solo RTW in his DA40, D-ETFF.
He will continue on January 29th via Hawaii, the USA, Bahamas, and Bermuda.
Thanks to Wolfgang Reichenberger (RTW 2019) for the information.

November 22, 2019:
Robert DeLaurentis (RTW 2015) departed from Gillespie Field, CA last Saturday to fly from the South Pole to the North Pole in a Turbo Commander 900, Citizen of the World. He is the author of: 'Zen Pilot'.
From AVwebFlash.


October 29, 2019:
Bill Harrelson (RTW 2015, speed record via the Poles) is preparing for another RTW, this time trying to beat Max Conrad speed record (at an average of 107 knots).
Bill plans to depart from Miami on December 6th.
https://www.6zqpilot.com/
Wishing him full success on such a very demanding task.
With thanks to ground crew member CA Garratt.

October 24, 2019:
Sincere congratulations to Barry and Sandra Payne for the completion of their RTW in their Comanche ZK-BAZ.
Larger picture
www.bazflyer.com

October 4, 2019:
Peter Teahen announces his RTW with John Ockenfels in his Piper Lance N36194 from Cedar Rapids, IA (CID), starting on May 8th, 2020.
They will be join in St. John Newfoundland by Ed Galkin and Mark Seeman in Ed's C210, N2160S. That will be Ed's fourth RTW.
Wishing them all, fair winds and blue skies. September 16, 2019:
From Art Mortvedt:
Steve Brooks and his superb 'Silver Spitfire' was passing through Alaska on their way to Russia.
Photo taken on the ramp in Fairbanks.
Thank you Art.
Larger photo.
https://www.silverspitfire.com/

September 8, 2019:
Many thanks to John Koehler for printing a batch of Earthrounders Stickers.
They will be available during the Switzerland Meeting in 2020. September 7, 2019:
Sincere congratulations to Daniel Ramseier for the completion of his RTW in his Piper Comanche HB-OVW. He landed today in Geneva, Switzerland.
www.handiflight.con
Larger picture August 16, 2019:
Sincere congratulations to Harry Anderson for the completion of his second RTW with his Columbia N788W, this time through Russia, China and Kazakhstan.
Larger pictures and Map of Harry's International Flights

August 16, 2019:
From Daniel Ramseier, our host in Switzerland in 2020:
The Handiflight is back in the air. They are approaching Easter Island.
Wishing them tail winds and blue skies...
https://handiflight.com/en/
https://share.garmin.com/HBOVW

August 6, 2019:
A RTW with a difference...
Two British pilots, Steve Brooks, 58 yo. and Matt Jones, 45 yo. are planning to fly around the World in a WWII Spitfire, the Silver Spitfire, G-IRTY. They plan to leave from Goodwood Airport in the UK and to finish in December.
Wishing them fair weather and blue skies.

July 25, 2019:
From John Koelher (RTW 2018) in Oshkosh:
My plane is prominently displayed at the intersection of Knapp and the P-1 taxiway with the Earthrounders logo on the tail.
I plan a group photo of Earthrounders on Friday 26 at 10am.
Also, I printed out Earthrounders stickers to hand out.
rv9abuilder@gmail.com

July 24, 2019:
From Serkan Zalaltuntas:
Hello everyone,
Myself and my partner are looking for an Piper Arrow IV, Mooney MJ series etc. aircraft, our budget is around $55.000 to $60.000.
If you have something like that please contact us
Thank you so much
Serkan
zalaltuntasserkan@gmail.com

July12, 2019:
Travis Ludlow of the UK is trying to be the youngest pilot around the World.
The present record is held by Mason Williams Andrews of the USA. He flew around the World at 18 years, 5 months and 10 days.
Travis is now 16 years of age.
https://aroundtheworldsolo.co.uk/?fbclid=IwAR20EjTIp9JcVcm2ngfCj7k_zwrxTKKzzHamxBeF-RbW78IRvoJ-MHI114g
Good luck.

July 6, 2019:
A RTW with a difference:
Aarohi Pandit has already completed close to 50% of her circumnavigation in a LSA, a Pipistrel Sinus 912, VT-NBF . She and her co-pilot Keithair Misquitta took off from Patiala, India in July 2018. Pandit is now in Canada.
Thanking Debkanya Dhar for the information.
www.wefly.org.in

June 24, 2019:
Sincere congratulations to Dr. Bo Zhang for the successful completion of his second RTW in his DA42 NG, N821ZB.
He landed on June 9th at the Lewis University Airport (KLOT).
Thanking Tony Xue for the information. June 19, 2019:
Sincere congratulations to Curió Vital and Matthias Reinacher for the successful completion of their RTW in a King Air C90A, D-IIKM.
Larger photo.


May 16, 2019:
The Seattle World Cruiser Project, celebrating the first 1924 circumnavigation of the globe by air, is planning a flight around the globe in the Seattle II, a replica of one of the four Douglas World Cruisers. Only two of the four World Cruisers completed the flight (Chicago and New Orleans).
Donations are welcome.
Thanking Robert Gannon for the information.
(The 1924 World Flight is told by Lowell Thomas in his famous book: The Firrst World Flight). May 12, 2019:
Fifty years ago, on May 12, 1969, Cliff Tait departed Hamilton in New Zealand for his flight around the World in Miss Jacy, an Airtourer AESL114, ZK-CXU.
Cliff wrote the story of the flight in a book:The Flight of the Kiwi.
Happy anniversary Cliff and Joyce.
Details of the flight
Database Flight Number: 477

May 12, 2019:
Edwin Galkin (RTW 1998,2004, 2018) is planning his 4th flight around the World in his C210 N2160S with Mark Seeman. The flight will again be raising awareness and contributions for Alzheimer's disease.
Larger photo
flyforthecure.org 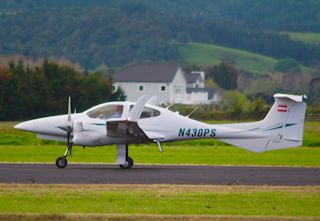 May 7, 2019:
Sincere congratulations to Wolf Reichenberger and his wife Monica for the successful completion of their three parts RTW. They landed yesterday at their airport of departure, Atlanta GA, PDK.
Photos

May 7, 2019:
Message from Rolf Frieden (RTW 2009):
As a RTW pilot, I am actually planning to put my fully equipped, beloved and trusty Comanche 260C HB-PON on the market.
Full details

April 29, 2019:
Barry and Sandra Payne have departed Taupo (New Zealand) in their Piper Comanche ZK-BAZ for '50 flights around the World'.
https://roundtheworld2019.com/
Thanking Bob Bates for the news.

April 29, 2019:
Message from Max Reason:
I am planning a long flying journey that may become an all the way around the world journey...
Please read the full message HERE

April 16, 2019:
Congratulations to Jack Long and his crew for the completion of their third RTW in Jack's PC12/45 N575PC.
Larger photo
Their final blog... 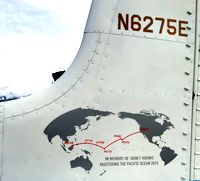 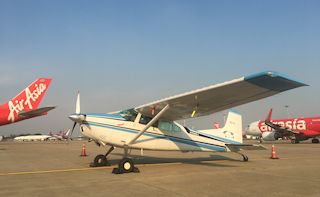 April 12, 2019:
Sincere congratulations to Stefan Mommertz for the completion of his flight around the World in memory of John T Kounis in N6275E, in a C185 Sky Wagon. He landed back in Germany a short time ago.
Watch Stephan Mommertz being interviewed by Klipp TV in the Philippines
More photos March 23, 2019:
From John Koehler (RTW 2018):
I just received notification that my speed records (ID 18605 and ID 18706) have been approved by the Federation Aeronautique Internationale (FAI) in Switzerland as World records and the FAI Circumnavigation Diploma, Eastbound.
Sincere congratulations.
Larget picture
https://memoryflightrtw.weebly.com

A reminder on how the FAI Circumnavigator Diploma can be obtained is HERE.


February 8, 2019:
Easter Island has introduced new charges, and asks US$ 14.70 per minute (!) for operations outside the official opening times of the airport, which are normally around 10-17h.
Thank you to WR for this valuable information.
More February 6, 2019:
Daniel Ramaseier of the 'Handiflight' team is visiting Claude Meunier while in Perth WA, in what young Bob Bates calls 'the Center of the Universe', aka Grass Valley in Western Australia.
https://handiflight.com/en/
Larger picture February 3, 2019:
At the traditional Earthrounders ski week in Champery, Switzerland, (Chez Angela & Flemming) we only managed to get 6 Earthrounders on the same 'perch'
Larger picture January 28, 2019
We are all very sad to learn of Wayne Collins passing away. He died in his sleep last Saturday. He was a WWII veteran and retired as a Captain in the US Navy. He flew twice around the World in his Vee Tail Bonanaza, N8502T, 'Kangahorn' in 1986 and in 1990 accompagnied by Charles Key.
For many years, Wayne had been our 'nonagenarian' pilot. He was born in 1924.
Our sincere condolences to his family and friends

Collins being interviewed by KTBS.

Wood County Airport (KJDD) in Mineola, TX, was renamed 'Collins Field' to honour Collins.
Details and another interview of Collins