November 22, 2020:
We just learned from the Tribune de Genève that our aviator friend Claude Reymond did his last flight on Saturday 24 October, La Côte - Gimel in Switzerland.
Claude Reymond was killed in the crash of the Jodel DR 250 he was flying. He was 89 year old.
An avid flyer, he joined the Earthrounders at the South Africa Meeting in 2008.
Sincere condolences to family and friends.
Obituary and photo.


With thanks to Angela and Flemming for the sad news. 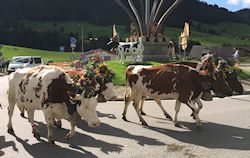 If it had not been for that horrible pandemic, we would be today in Switzerland with our host Daniel, sharing a few drinks and swapping tall stories.
Hopefuly,we shall meet again a year from today in Switzerland as planned.
Our host Daniel has posted a video of the "Desalpage", quite an event when the cows come down from their summer pastures high in the mountains to spend the winter in the valleys. It is on Face Book in the "Community"section and also can be seen here: or by clicking on the picture at right.

We wish you all to stay safe and healthy and we are all looking forward to our next gathering.

Shinji Maeda in his brigthly decorated Vee-Tail Bonanza, Lucy (N9787Y), is aiming at a departure on May 1, 2021 or between May and August 2021 or in 2022, all depending of Covid-19 restrictions.
For more information:
https://www.aerozypangu.com
Larger pictures

July 30, 2020:
From Ravinder Bansal:
Finally after three years, my record solo flight has been verified and accepted by the Limca Book of Records (owned by Coca Cola!) which is the Indian equivalent of Guinness Book of Records for India, confirming that I am the first person of Indian origin to fly around the world solo in a single engine plane!.


July 10, 2020:
Belated sincere congratulations to Matt Jones,Joe Brooks and Ian Smith for their successful completion of their extraordinary RTW in a Supermarine Spitfire, G-IRTY.
They started on August 5, 2019 from Goodwood Aerodrome, Chichester, UK, (EGHR) and landed on December 12, 2019.
This is the only RTW in a single seat aircraft.
Matt Jones and Ian Smith also flew a PC-12, OY-THP, as the support aircraft .
www.silverspitfire.com

June 14, 2020:
Michel Gordillo (RTW 2001, 2016) announces his new Book:"NORDPOL UND SUDPOL IM SOLOFLUG".
Miguel Angel Gordillo is the first person to circle the earth over the North and South Poles with a home-built airplane weighing less than 1750 kg.
In 2016, he covered 76,000 km under the most extreme flight conditions across the desert, jungle, mountains, ocean and ice, setting the world record for the Fédération Aéronautique Internationale.
More photos of EC-XLL
Book details and ordering Form.


June 8, 2020:
SWITZERLAND MEETING:
Hope you are all well in those difficult times and that no one around you is affected by the virus.
Unfortunately and because of the risks caused by the Corona Virus, our Meeting in Swtzerland this year is being postponed to next year.
The new dates are now: From Tuesday, September 21st to Sunday, September 26th.
Those are sad news but we may feel lucky if the price we pay is only a change of date to our meeting as too many people have lost their jobs and some have lost their lives.

Looking forward at meeting again, even if it is at a later date…

Cheer up and wishing you to stay safe. 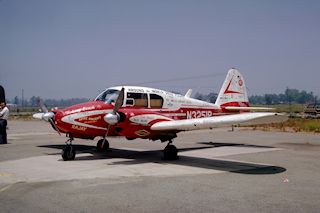 May 13, 2020:
Thanks to Tiffany Ann Brown, author of Fate on a Folded Wing for this link to an excellent article on Joan Merriam Smith.
Larger picture. Congratulations and best wishes for the completion of your RTW!
Larger picture


March 31, 2020:
As Avgas is getting more and more difficult to get in some countries, aircraft fitted with Diesel engine are getting popular. That is what Wolfgang Reichenberger and his wife Monica have used for their RTW in 2019 (Fight Number: 653).

AVweb has published a very interresting video on the Diamond DA40 NG.


Dear Earthrounders,
We hope you're fine despite the current situation. Although at this time, we are still confident that our meeting will be able to take place in September as planned, and confirm that your accommodation is booked, we suggest that payment of the registration fee be postponed until June. We will then contact you individually to confirm your registration. If you click on this link you can follow the arrival of spring in Châteaux-d'Oex ;-)
Take care of yourself and your family,
Kind regards,
Daniel.

March 24, 2020:
FOR SALE:
A beautiful Aerostar (Aren't they all beautiful?)
Photo and details. 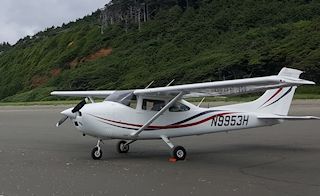 March 16, 2020:
From Ross Edmondson:
My C182 flight has now made it as far as Auckland, New Zealand, and I am waiting for the Corona Virus travel restrictions across the Pacific to be lifted before continuing back to the USA to complete the circle.
Larger picture
http://katamarino.co.uk/


March 10, 2020:
Two crews (Ed Galkin and Peter Teahen) are postponing their RTW flights due to the current situation with the Corona Virus.

March 9, 2020:
Sincere congratulations to Jens Thamer for the succesful completion of his RTW in his Diamond DA40, D-ETFF. He landed on March 7 at Hersfeld (EDEN), Germany.
Larger picture. March 7, 2020:
From Peter Teahen:
We continue to plan for our departure on March 24 and we are monitoring the Corona Virus situation.
Larger picture

February 20, 2020:
Great news from Jack Long (RTW 2015, 2017, 2019) and his team, They will fly to the Switzerland Meeting with their Pilatus PC-12, N575PC, on what Jack calls the “ wrong way“ .
That will be their fourth RTW.
Wishing then fair winds and blue skies and hoping others will also fly to the meeting.
Larger photo

February 1, 2020:
Congratulations to:
Dierk and Alex Reuter in their TBM 930 N444CD and Sebatian and Patricio Diaz in their TBM 850 for the completion of their RTW via the Poles.

They also have obtained the FAI Circumnavigator Badges.

January 10, 2020:
Ravinder Bansail (RTW 2017) is announcing his new book: "Cleared Direct Destination: My Solo Flight Around the World for Cancer Awareness"..
All proceeds from the book will be donated to the Rotary Ambala Cancer Hospital.
Details :
www.raviworldflight.com January 2, 2020:
Peter Teahen and John Ockenfels are announcing their departure from Cedar Rapids on March 14 in Peter's Piper LanceII N36194.
They will be rising awareness around the globe to eradicate polio through Rotary International and the Bill & Melinda Gates Foundation.
Larger picture
Article in the Gazette.
Flight to end polio.