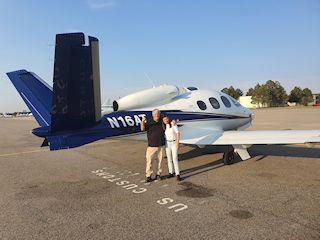 Sincere congratulations to Amir and Tamra Hyster for the successful completion of their Eastbound RTW.
They flew their Vision Jet N16AT from and to Centennial Airport (KAPA).
They are the first amateur pilot/crew to have flown around the World in a single engine Jet aircraft.
Larger picture.

Belated congratulations to Tom Grossgar, his wife Natalie and young children Jean and Claire for the successful completion of their Westbound RTW.
They were flying a beautiful Aerostar (all Aerostars are beautiful, according to the Webmaster!)
More pictures> Sincere congratulations to Martine Kist and Alex Gronberger for the successful completion of their Eastbound RTW.
Part of their Buenos Aires to Buenos Aires trip they landed at Coeur d'Alene Airport, Idaho (KCOE) where they were in April.
There, they did come across Tom and his family flying Wesbound in an Aerostar.
They were also lucky to come across Amir and Tamra Hyster in their Vision Jet N16AT, flying together from St Petersburg to Anadyr in Russia.
Meeting in KCOE, April 2021
Their blog. 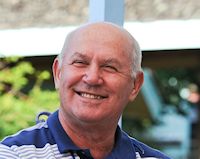 A sad day for all Earthrounders.
We lost our friend Sergey Terehkin. He passed away peacefully testerday in a Madrid Hospice. He was 73.
He was our Host in the Earthrounders Meering in Saint Petersburg in 2014.
We all of course thought the world of Sergey and he and I did many flying trips in all parts of the world and we became the best of friends.
Bob Bates
Our sincere condolences to his wife, daughter Anna and grandson and to all who knew Sergey.

Yesterday, August 18, 2021, Zara Rutherford, a British-Belgian lady, 19 years old, took off from the International airport Kortrijk-Wevelgem (Belgium-Europe) for a flight westbound around the world and so to overfly 52 countries. She is in the Slovakian built "Shark", a VLA-aircraft. She plans to become the youngest female solo pilot around the World.
She is already in Scotland.
We wish her success all along.
https://flyzolo.com/
More photos.

Sincere congratulations to John Bone for the successful completion of his second Eastbound RTW.
He landed on August 10 in Apalachicola, FL
"I flew over 7,000 miles in Russia and cannot say enough about how helpful, friendly and accommodating the Russian pilots, mechanics, airport workers and everyone else were. A very friendly general aviation country. "
Larger picture.
John Bone's first Westbound 2017 RTW
https://forgottencoastflyers.com/

Nineteen year old, Zara Rutherford announced her departure from Belgium on August 18.
She plans to be the youngest female solo pilot to fly around the World.
Wishing her success, fair winds and blue skies all along.
https://flyzolo.com/

John Bone departed Florida on June 26th for his second Eastbound RTW. He is now in Russia and was welcomed in Konakovo (UEEL) by Maxim Sotnikov and Natalia Sotnikova.

Sincere congratulations to Travis Ludlow for the successful completion of his RTW.
He wanted to be the youngest solo pilot around the World.
Upon verification, he has beaten the precedent youngest pilot, Mason William Andrews (RTW2018) by 13 days.
https://aroundtheworldsolo.co.uk
More photos

John Bone is welcomed in Konakovo (UUEL), Russia by 4 and a half Earthrounders...
Thanking Natasha Sotnikova for the photo and thenews.
Larger photo

Adan Stites plans to leave Tucson (KTUS) for Europe and an Easterly RTW.

Another contender to become the youngest pilot to fly solo around the World.
From Bryan Meijer from Bunbury in Western Australia (YBUN):
Ever since I was about six I had the desire to fly. So as soon as I turned 13 and was old enough to start working I got my first job as a kitchen hand in a little restaurant 5km away from my house. I worked almost every Saturday and Sunday for the next 3 years. This was to pay for flight school at my local airport where I would train once a fortnight in order to get my pilots licence. I then set my sights on being the youngest person to fly solo around the world and beat the record by over a year, flying over 5 contents, over 20 countries and further than 26000 nautical miles.

Wishing Bryan fair winds, blue skies and fair weather all along and success in his project…

Sincere gongratulations to Shinji Maeda for the successful completion of his RTW in his red "V" tail Bonanza N9787Y. He landed at Snohomish airport. WA. on June 11.
He is the secong RTW and the first solo RTW to be completed since the pandemic.

SWITZERLAND MEETING
Hope you are all well .
Unfortunately our Meeting in Swtzerland this year is being postponed again to next year due to the pandemic.
The new dates are now: From Tuesday Sunday 27 September to 2 October 2022.
Looking forward at meeting again…

Cheer up and wishing you to stay safe.

Travis Ludlow is now in Alaska.
He met with Art Mortvedt in Manley Hot Springs.
Larger picture.
Thanking Art for the picture.


Nineteen year old, Zara Rutherford, will try to be the youngest female solo plot to fly around the World.
She plans to start in August.
Wishing her fair winds and good weather all along...

Young Travis Ludlow plans to leave the UK on May 29th, 2021, trying to become the youngest pilot to fly around the World.
Present youngest pilot is Mason William Andrews who was 18 years, 5 months and 10 days old, at the completion of his RTW in 2018.

Thanking Jim Nisbet for the information

Great news from those rare Earthrounders on the move:

Sincere congratulations to Tom and his family (wife and two young children) for the successful completion of his RTW in their Aerostar. They just landing back in Germany.

Martina and Alex Gronbergerr are in Iceland after a successful crossing of the North Atlantic. In Buffalo they met Earthrounder Ravinder Bansal (RTW 2018) and his wife Pratibha.
Their blog.

And Shinji Maeda is in Sri Lanka, on his way East in his bright red 'V' Bonnza.
aerozypangu.com


Adrian Eichhorn (RTW 2016) has completes his North Pole run and is on his way back to Portland.
He took off from Manassas VI with Shinji Maeda and thay flew together in their colourful "V" tail Bonanzas to Newfoundland. Maeda continued Eastward in his RTW and is now in Greece.

Great news from Adam Broome (RTW 2016):
There was an informal gathering of Earthrounders on May 5th in Manassas, Virginia to celebrate the start of new adventures by Adrian Eichhorn and Shinji Maeda. Shinji recently departed Everett, Washington on an eastbound circumnavigation in his beautifully decorated P35 Bonanza, "Lucy" (N9787Y). A veteran Earthrounder (RTW 2016), Adrian plans to fly his award-winning P35 Bonanza (N1733G) across the North Atlantic, then aims to fly over the North Pole to Alaska. Adrian and Shinji are launching "Polar Flight 2021" this week and will make the Atlantic crossing together, after which Adrian will head toward the pole and Shinji will continue his circumnavigation. To see them off were Bill Harrelson (RTW 2015, 2019) in his Lancair IV (N6ZQ) and Adam Broome (RTW 2016) in his A36 Bonanza (N5831R).

Wishing them all fair weather, blue skies, plenty of tail winds and a safe return...

The only two teams flying around the World at the momnet met at Coeur d'Alene Airport, Idaho (KCOE).
Larger photo and details.

Thanking Saki Chen (RTW 2016) for that great group photo taken at the end of the Zhenzou Meeting. 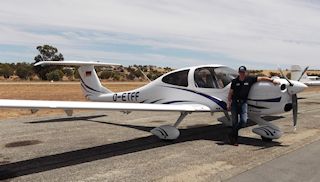 April 20, 2021:
From Jens Thaner (RTW 2020):
Now, more than one year after my arrival at Bad Hersfeld (my homebase), the homepage of my trip is nearly ready with videos. More will be added shortly.
If someone has got a question he will be able to contact me.
Jensthamer@gmx.de
www.D-ETFF.de
Larger picture. 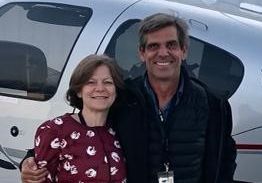 From Martina and Alex Gronberger:
We left Buenos Aires on March 4th 2021 in our SR22 LV-GQF. We have reached the North of the USA and have the plan to slowly make our way Eastwards to Europe and then to Alaska via Russia before heading back South.

Congratulations to Martina amd Alex as they are the first team to start their RTW since the start of the pandemic.
Wishing them fair winds, blue skies and a safe trip.


March 22, 2021:
From Tony Bird:
I have two ferry tanks made of aluminum 59usg and 120usg for sale in Florida. They were made for a Bonanza 36 and have been around the world once.
I would also consider a trade for tanks designed for a Saratoga.
My email is tonybird@sprucecreek.usand my phone is 3863417056.

Februay 28, 2021:
From Ravinder Bansal (RTW 2017):
..., I finally have a pdf for my book “ Cleared Direct Destination“ ...
..., I like to make my book available free of cost to anyone who is interested in making an RTW of his own or just reading about it.
Click here for the PDF copy.
Click here for details on the hard cover copy.

Februay 22, 2021:
From Peter Wilson (RTW 2017):
Matthew Gallagher and I have just received our Guinness World Record for the First Circumnavigation through antipodes.
Peter has also written two new books.
See our Books page. January 19, 2021:
From Arshid-Ghavanin:
"It is with regret that we must write to inform you about the untimely death of Farhad Rostampour. Farhad passed away doing what he loved, on the 13th of January 2021 shortly after 10:33am EST; in the aircraft that made history (Bonanza F33 N266DC). We send our sincerest wishes to all of his friends and family, as they remember and celebrate the life of a warmhearted friend above all else."

Sincere condolences to Arshid (his co-pilot), his family and friends.

(In 2007, they were the first Iranian-born pilots to fly around the World.)
Bonanza N266DC.
http://www.freedomflight.info/